A tractor-trailer ignited in flames forced a closure of the Highway 401 eastbound lanes near Belleville on Wednesday, July 30, 2014.

Twitter photos show the vehicle engulfed in a ball of fire.

The Ontario Provincial Police say the driver hit a couple of guard rails which caused his fuel tank to burst in flames. The cargo which was wooden furniture quickly caught fire completely destroying the cab and trailer.

"That's the first one I come that close to seeing it on fire. It was pretty intense," says one witness.

Several transport trucks were stuck for as long as six hours as road crews worked to clear the wreckage.

Highway 401 eastbound near Belleville remained closed until late in the evening.

This is the third major road closure at the section of highway in as many days.

On Tuesday at about 3:40 p.m., two vehicles struck the back of a tractor trailer. A 51-year-old man died of his injuries. The night before the westbound lanes were closed after a transport truck drove into a ditch.

OPP say motorists need to be aware of road construction along this stretch of highway and make adjustments to their driving much earlier.

With a report from CTV's John Hua 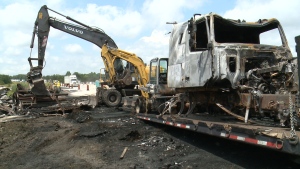 Aftermath of Tractor-Trailer fire on Hwy 401

Do you avoid driving on Highway 401?