Fireworks and the sounds of truck horns filled the air on a cold Saturday evening, as thousands of truckers and their supporters remained in downtown Ottawa.

The ‘Freedom Convoy’ demonstrators are protesting COVID-19 vaccine mandates and other public health restrictions, with no word on what will happen next or how long they are planning to stay.

The number of vehicles and people converging on the area around Parliament Hill caused total gridlock in the city's core, closing roads and forcing a downtown mall to close early for the day. At 9:30 p.m. people remained on the lawn of Parliament Hill or walking along Wellington Street, where dozens of trucks remained parked.

“We had a busy day with our officers out on the street early to set the tone for welcoming people, but making sure that everybody knew there were limits," said Acting Deputy Chief Trish Ferguson during an interview on CTV News at Six.

“We didn’t have any incidents that officers needed to intervene in terms of arrests or anything of that nature. Just a lot of noise, truck traffic, traffic in the downtown core and gridlock in certain areas. We expected that was going to be their goal today, and we certainly saw that.”

Early Saturday evening the crowd thinned out on Parliament Hill, while some people were seen setting off fireworks on the hill and on Wellington Street.

“The crowd has generally been peaceful; they’ve been disruptive in the sense that a number of our businesses had to close down and people are stuck in their homes because they live in the central core,’” said Mayor Jim Watson in an interview with CTV News Channel Saturday evening.

The mayor added that in any large crowd, "you're always going to have a few people that are stupid."

Crowds began to form on Parliament Hill around 9 a.m. Saturday and grew significantly throughout the morning. By mid-afternoon, the sheer number of trucks and other vehicles driving downtown to join them caused officials to warn people that downtown Ottawa has no more room.

"Streets in the downtown core are closed due to gridlock," the city tweeted. "There is no more room for vehicles, except for first responders. Please avoid the area."

The freedom convoy is completing a cross-country journey to Ottawa. Hundreds of convoy participants arrived in Ottawa Friday, filling streets with the constant sound of truck horns and cheers preparing for the weekend demonstration. Many more joined on Saturday.

Police said Saturday afternoon the crowds were peaceful and there were “no major incidents to report." They said they were diverting traffic away from the core and urged people once again not to come downtown.

The Rideau Centre mall closed for the day after it became a gathering spot for protesters seeking warmth, many of them not wearing masks.

A steady stream of people walked and drove across the Ottawa River from Gatineau to join the demonstration. Gatineau police urged people to avoid the Hull sector due to traffic congestion, and the Portage and Chaudiere bridges were temporarily closed to vehicle traffic for several hours. Both bridges reopened to traffic around 2 p.m.

"The demonstrations this weekend will be unique, fluid, risky and significant," said Ottawa Police Chief Peter Sloly, adding officers are on guard for possible "lone wolf" protesters not directly affiliated with the main group.

Police are also keeping the grounds of the National War Memorial clear. Some people had parked their vehicles there, but police said they are no longer there. Some were asked to move and complied, and others were towed.

"Parking on this sacred ground that includes the Tomb of the Unknown Soldier was a sign of complete disrespect," Watson said on Twitter.

Ottawa police asked residents to stay out of the downtown core and avoid non-essential travel due to the demonstration and related traffic gridlock.   There will be several road closures and lane reductions through the downtown core all weekend.

"We will do everything possible to maintain emergency routes in the core, but we ask everyone not to visit or travel in the downtown core if you do not need to," said Chief Sloly.

Ottawa police don't know how many trucks and demonstrators will be in downtown Ottawa and on Parliament Hill.

"We do not have an established end date for the demonstrations – they could go through the weekend into next week," said Sloly.

Officers from Toronto Police, York Regional Police, Durham Police, London Police and the OPP are in Ottawa to assist Ottawa police and the RCMP.

The Ottawa Hospital and the Queensway Carleton Hospital told staff driving to work from Quebec to use the Chaudiere Bridge when crossing the Ottawa River.

Bridges have been temporarily closed all day due to the protest in downtown Ottawa and related congestion.

The Ottawa Hospital told staff, "Have your staff ID on hand to show police. You can then access our hospitals via Booth Street."

The Queensway Carleton Hospital, "officials have confirmed that if you need to cross the bridge to get in for your shift that you should cross at Chaudiere Bridge and show your badge. Please allow extra time as there are traffic impacts in other areas."

The Alexandra Bridge is closed to all vehicle traffic this weekend, and the Macdonald-Cartier Bridge will have lane reductions.

The city of Ottawa and Ottawa police say to expect lane reductions on the following roads:

Police said on Friday that trucks will be directed to the following exits along the Queensway: Pinecrest, Kent and the Sir George Etienne Parkway. 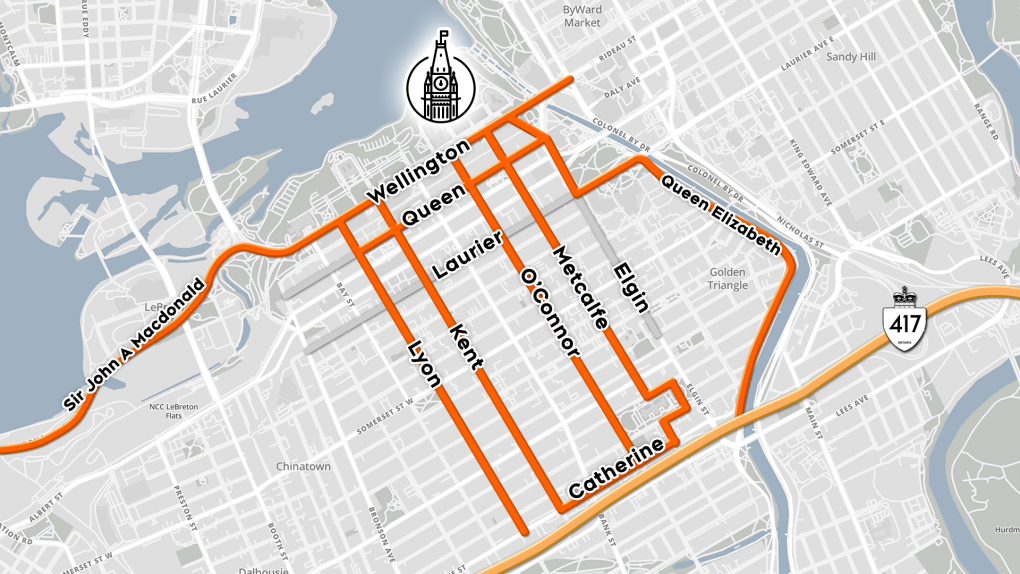 Speaking on Newstalk 580 CFRA Saturday morning, OPP spokesperson Bill Dickson urged the convoy participants to abide by the rules of the road.

"If I were to give one message this morning to those who are participating in these convoys that will be making their final approach to Ottawa and Parliament Hill this morning, it would be please, please, continue to abide by the rules of not impeding traffic and that means leaving one lane open."

Dickson said having that one lane for emergency vehicles is paramount.

"Looking at Ottawa, we've got multiple hospitals. There's a cardiac care centre, there's the children's hospital. Ambulances are always on the go to into the city of Ottawa. Seconds make a difference when it comes to people's lives and if an ambulance cannot get to a hospital, well, you know what the consequences could be."

Dickson also urged supporters to keep safety top of mind, especially for those looking to cheer on truckers along the highways.

Canada Unity and the Freedom Convoy 2022 Facebook page have released few details about the plans for the rally in Ottawa on Saturday and Sunday.

There were several speakers from a flatbed truck in front of Parliament Hill through the afternoon on Saturday.

What is the Freedom Convoy?

The freedom convoy is calling for the end of vaccine mandates in Canada during the COVID-19 pandemic.

"On January 15th, a small team of Alberta truckers, their family members and friends, came to the decision that the Government of Canada has crossed a line with implementing Covid-19 vaccine passports and vaccine mandates," said a statement Wednesday on the Freedom Convoy 2022 Facebook page.

"As of today, we now have the support of millions of Canadians from across the country."

The list of demands includes the federal and provincial governments terminating the vaccine passports and all other "obligatory vaccine contact tracing programs", and terminate COVID-19 vaccine mandates.

The protest was initially sparked by outrage over a vaccine mandate imposed this month on cross-border truckers, but has since garnered support from anti-vaccine mandate groups.

In a statement on Friday, the Freedom Convoy organizers urged participants to "treat all police officers with respect" and "do not make any type of threat."

"If we keep calm and show love and support for one another, many things will happen. We will eventually cause the government to reverse its policy on Covid passports and vaccine mandates as the UK has recently done," said the Facebook post.

200 bodies found in Mariupol as war rages in Ukraine's east

Workers digging through rubble found 200 bodies in Mariupol, Ukrainian authorities said Tuesday, another grim discovery in the ruined port city that has seen some of the worst suffering of the 3-month-old war.