Ottawa police and city officials continue to prepare for the "Rolling Thunder" event arriving in capital this weekend.

More than 500 motorcycles are expected to take part in the demonstration, which will include events on Parliament Hill and at the National War Memorial.

The motor vehicle exclusion zone in the downtown area will come into effect at 8 p.m. Thursday.

Here's what you need to know about the "Rolling Thunder Ottawa" event this weekend in Ottawa.

What is "Rolling Thunder Ottawa?"

The "Rolling Thunder Ottawa" website offers no information about the group, including the purpose for the event this weekend in Ottawa. Groups listed on the website supporting the event are Veterans for Freedom and Freedom Fighters Canada.

"This is not a demonstration, this is not a protest, this is not a convoy. From the beginning, we've been saying that and everybody keeps saying it's a convoy," organizer Neil Sheard said. "This is a bike rally to help heal and give back that dignity to that monument that was desecrated by the powers that be."

Sheard served with the Canadian Armed Forces and did two tours of duty in Afghanistan.

Ottawa police say it’s too early to predict how many people will attend, but organizers say they expect more than 500 motorcycles to participate. 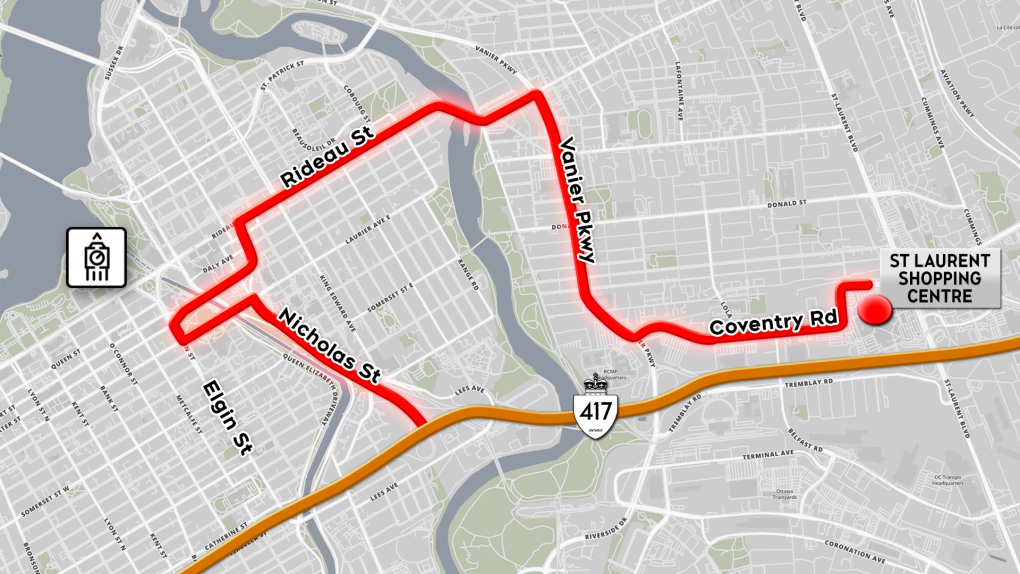 Ottawa police have shared the full planned route for the 'Rolling Thunder' motorcycle ride on Saturday.

What is the route for Saturday's biker ride?

The bikers will leave a location on Coventry Road, east of downtown, around 10:45 a.m. and take the following route:

The route will be a no-stopping zone, with officers en route to direct traffic and move vehicles along if they stop.

What is the exclusion zone?

The only vehicles that won’t be allowed in the exclusion zone are those taking part in a demonstration, event, protest or rally, the city said in a news release.

Barricades, heavy equipment or police officers and vehicles will be at various access points surrounding the exclusion zone to filter "lawful traffic" onto the streets, police said.

Police say the roads are not closed in the exclusion zone, and normal traffic circulation will be permitted.

The exclusion zone stretches from Waller Street to Bronson Avenue and Wellington Street to Laurier Avenue, along with the ByWard Market area from MacKenzie Avenue to King Edward Avenue and Rideau Street to Murray Street. 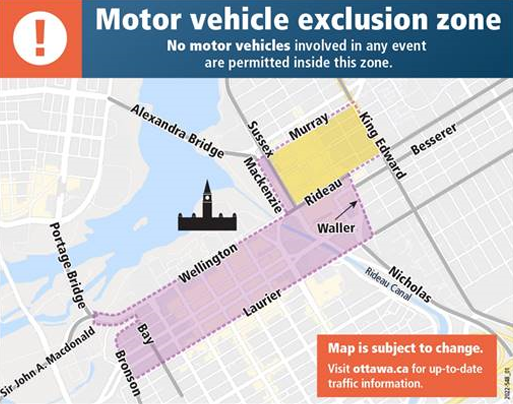 The city of Ottawa says on-street parking will be permitted this weekend in the area coloured yellow. (Photo courtesy: city of Ottawa)

Will there be police checkpoints?

Ottawa police insist there will be access for pedestrians, cyclists and public transit through the exclusion zones into the downtown and ByWard Market areas, with officers focusing on monitoring vehicle traffic.

"What we’ll have is a mix of equipment supplied by the city to actually barricade access to certain roads as well as officer presence in certain areas to monitor and allow for traffic in and out of the areas," Bell said.

"We have a really in-depth plan that’s well-resourced and works with our city partners to make sure that we can control the access as we need through the area that we’ve identified as the exclusionary zone."

Bell says there will be barricades and hard barricades such as jersey barriers, fencing and fixed structures.

Will roads be closed in downtown Ottawa and the ByWard Market?

Ottawa police say roads will not be closed in downtown Ottawa, including around the motor-vehicle exclusion zone.

"Residential and business traffic, as well as pedestrians, cyclists and public transit are permitted," the city said in a statement. "The Rolling Thunder event may result in some temporary traffic delays."

Where are the no on-street parking or stopping zones?

The city of Ottawa says there will be no on-street parking or stopping in the area of:

The city of Ottawa says on-street parking will be permitted this weekend in the area coloured yellow. (Photo courtesy: city of Ottawa)

Where is parking permitted downtown?

On-street parking will be available for vehicles not participating in the rally/event in the ByWard Market area.

Parking will also be available at all parking lots and garages in the downtown area and ByWard Market.

Are there parking restrictions outside the exclusion zone?

The city of Ottawa says there may be temporary no-parking and no-stopping areas marked with signage, mostly in neighbourhoods surrounding the downtown core.

"By-law and Regulatory Officers will be patrolling streets to enforce parking regulations," the city said on Thursday.

"Any motor vehicles failing to observe road signs may be ticketed and/or towed."

Will bylaws be enforced?

Ottawa Bylaw will be out in force this weekend to enforce bylaw rules during the "Rolling Thunder Ottawa" event.

The city has said there will be no opportunity for participants to entrench in the downtown area during the protest.

"All vehicles found failing to observe the no-stopping zones will be ticketed and towed," the city said.

In addition to parking violations, Bylaw Services officers will be focusing on the following bylaws:

Which other police forces will be on hand?

Ottawa police say residents will see a "significant increase" in officers from Ottawa police and outside forces.

Officers from the OPP, RCMP and other municipal police forces will be on patrol in Ottawa throughout the weekend.

"The focus of our plan will be on public safety, maintaining the right to protest and enforcing all applicable laws," Bell told council.

"The plan draws on extra police resources and is designed to meet the issues we may face.  We have already begun to put that plan in place.  Residents will see a large police... including bylaw and parking enforcement officers. "

Can I still take the bus?

OC Transpo says there will be no changes to bus and O-Train service through the weekend.

All bus routes will continue to operate in downtown Ottawa.

Will city hall be open?

Ottawa City Hall and its underground parking lot will be closed from 5 p.m. Thursday until 7 a.m. on Monday.

Will there be increased police presence in other areas of Ottawa?

Participants of the Rolling Thunder Ottawa event are expected to arrive and depart from a rural site on Eagleson Road.

Will St. Laurent Centre be open?

St. Laurent Centre will be open this weekend.

"Providing a safe and enjoyable shopping experience for our guests is our main priority. St. Laurent Shopping Centre is open to customers this weekend," St. Laurent general manager Amy Rozario said in a statement.

Family members, friends and veterans gathered Sunday to pay their respects and remember the lives of Albertans who died while fighting in peacekeeping missions and support operations around the world.