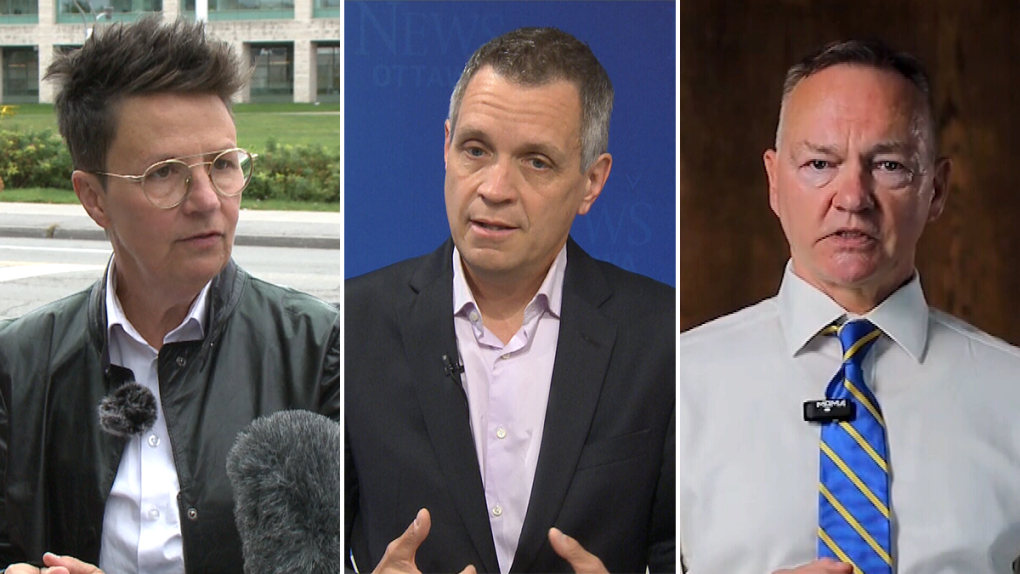 Those were the main promises that some Ottawa mayoral candidates promised on the campaign trail on Wednesday. Here’s a closer look at the details.

McKenney said they would make the language in the annual budget easier for the public to understand and start public consultations on the budget earlier. They also pledged to make all city committees balanced in terms of gender and geography, if elected.

“It’s time to get the influence of money out of City Hall. Our decisions should be influenced by people, not money,” said McKenney. “We deserve a City Hall we can trust. As Mayor, I’ll change the culture at City Hall to put people first and build a city that works for all of us.”

McKenney would also create a chief architect for the city of Ottawa.

The Somerset Ward Councillor also said they would commit to a "three per cent approach to property taxes" if elected, calling it a "fiscal anchor" for the city. McKenney had previously been critical of Mayor Jim Watson's tax cap of three per cent, saying it limits flexibility.

Speaking on Newstalk 580 CFRA's "Ottawa Now with Kristy Cameron", McKenney said the difference is that they will soon be releasing a full, fiscal plan that outlines their spending plans and priorities over the next term of council, to show where the funding for promises and priorities will come from.

McKenney said they were committed to keeping tax increases within that three per cent limit.

Mark Sutcliffe is promising to make Ottawa a “music city.”

He says this would be achieved by reviewing city bylaws to help support musicians, including buskers, and by creating a music office, which would serve as a single point of contact for musicians looking to perform in Ottawa.

“Residents are tired of searching for their favourite artist’s tour schedules, only to see Ottawa not make the list - and I’d like to see that change. To build a world-class city, we need a community that is safe, reliable, and affordable. But we also need to build a city that excites people and offers diverse cultural experiences. Making Ottawa a Music City is one way we can achieve that vision,” Sutcliffe said.

He added that the last concert he attended was Sum 41 and Alexisonfire at Bluesfest.

In 2020, the city launched three core music programs: Music on Hold, OC Transpo Busking Program and City Sounds. Music on Hold gives local musicians the opportunity to have their music featured when callers to city phone lines are on hold. The OC Transpo Busking Program was meant to allow buskers to perform at O-Train stations, but it has been on hold because of the COVID-19 pandemic. City Sounds City Sounds is an annual streamable playlist featuring local musicians.

Mike Maguire is pledging to review the city’s environmental policy, saying city council has “allowed environmental considerations to take priority over too many other aspects of running a city including, livability and affordability.”

Maguire is proposing that Ottawa revisit its Official Plan, which was approved by council last October but has yet to be approved by the provincial government. He is critical of a plan to add wind turbines to the electrical grid and wants to reconsider the rush to transition to electric vehicles, particularly on public transit.

He also says he would work with the provincial government to have Ottawa’s electrical grid powered by nuclear energy.

The Winnipeg Police Service believes the remains of two victims of an alleged serial killer are in a landfill north of the city, but says the recovery of their bodies is likely impossible.

Democratic Sen. Raphael Warnock defeated Republican challenger Herschel Walker in a Georgia runoff election Tuesday, ensuring Democrats an outright majority in the Senate for the rest of U.S. President Joe Biden's term and helping cap an underwhelming midterm cycle for the GOP in the last major vote of the year.

Having a poor turnout for a book signing is something every author dreads, but after debut author Chelsea Banning tweeted her disappointment after an event, the literary community came together to share countless stories of their own event disappointments to uplift one another.

'Bring them back!': Calls to bring Canadians home from Syria come from inside and outside of court

'Bring them back!' activists yell at lawyers as they walk into the Federal Court in Ottawa, where a judge will decide whether or not to order the Canadian government to repatriate more than 40 Canadians imprisoned in northeast Syria.

In the 73 minutes on Tuesday afternoon that it took for Prime Minister Justin Trudeau and five other dignitaries to officially open the 15th global talks to save nature from human destruction, statistics suggest another 4,000 hectares of forest around the world was lost to that same force.