Here are some popular costumes for Halloween this year

OTTAWA -- With Ottawa’s top doctor saying trick-or-treaters can ‘enjoy’ Halloween this year it’s time to start thinking about what costumes to wear — and which are the most popular.

Characters from the Netflix series ‘Squid Game’ are making many of this year’s popular Halloween costume lists — but, because the show is so new, you may have to get a bit creative and have a D-I-Y approach at making your own costume.

“A lot of the Netflix stuff is brand new, so it’s not even in the stores yet,” says Joanne Lajoie, Manager of the Innes Road location of Spirit of Halloween.

She says they have a D-I-Y section in the store, and can help you put a costume together.

“Just show us a picture, and we’ll try and put it together for you.”

Lajoie says that if you prefer to pick up a ready-made costume, there are many popular choices.

“It’s really a mixture of stuff this year.”

Movie characters such as Spider-Man and the clown ‘Pennywise’ from “IT: Chapter Two” are popular. Even video games are coming to life as costumes, she says. 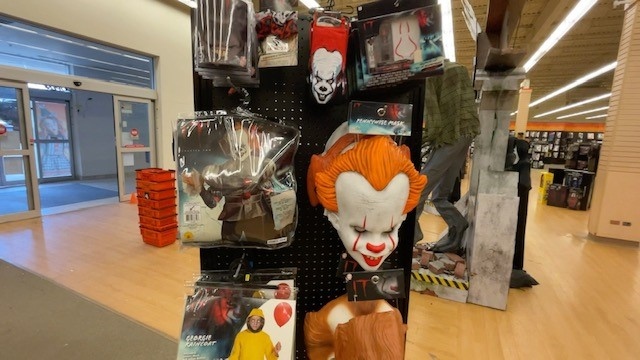 With COVID-19 pretty much cancelling last year’s Halloween, many are going all-out this year.

“It’s been extremely busy, which is good,” says Lajoie, ““I think people are feeling a little more comfortable this year.”

Athena Sparks at Audrey’s Costume Castle and Dancewear says customers are also asking for a variety.

“Here it just seems to be a variety, because of COVID limiting movie goings and releases of TV shows and movies.”

Of course, if you just aren’t sure and leave it to the last minute, she does have a suggestion for you.

“I think we might sell out of cat ears; that’s almost always a guarantee. because that’s a really good last (minute) costume, right? Or a really easy costume?”

Here are some popular costumes for Halloween this year

12 Halloween attractions to check out in Ottawa, eastern Ontario and western Quebec this month

Scary skeleton decorations sold out ahead of Halloween!