Her Reasons to Fight

OTTAWA -- If great fighters need reasons to fight, Jo Maisonneuve has a fistful.

"When I tell my full story, people say you’re only 30. How could you have been through so much?" Maisonneuve said.

Jo’s story begins with the theft of her childhood

"Sexual assault.  I have a terrible past with that," she said, her voice breaking.

Maisonneuve recounts having a series of flashbacks, memories of trauma when she was just five years old.

"I started having these flashbacks, and I had no idea what they were. They just didn’t make me feel good," she said.

"And when I was 12, it was when it happened again. And then these flashbacks felt really real. Then I remembered everything."

The reality of her abuse left Maisonneuve drowning in a tsunami of grief and heartache.

"I went through doing drugs, suicide, being hospitalized. Went through all of it," she said.

Maisonneuve got professional help and began seeking a new path.

She joined the Canadian Armed Forces, but at age 21, would wage her first battle with an unexpected enemy.

"What do you mean it could be cancer? I am 21. There’s no way I have cancer," she said, recounting the moment a doctor shared news that Maisonneuve may have cervical cancer.

Soon, a biopsy would confirm the doctor’s suspicions and Maisonneuve’s worst fears.

“They said, ‘You have cancer and we have to do a hysterectomy.’ And I’m like ‘What?’ This just got real high, real fast. And to be honest, I didn’t even know what a hysterectomy was,” she said.

“And after I did, I said 'We’re not doing a hysterectomy.'" Maisonneuve opted, instead, for other types of cancer treatments. They were successful.  Maisonneuve had her life back and wanted to spend it in the ring.

"I had my first MMA fight and said, 'Alright, this is what I’m doing,'" she said with a wide smile.

She won her debut, amateur match in less than a minute.

"It was a very aggressive 43 seconds.  I just unleashed," she laughed.

Mixed martial arts would become the heartbeat of Maisonneuve’s world.  She trains at the Ottawa Academy of Martial Arts on Carling Avenue in Ottawa. She is now a pro MMA fighter and fierce Brazilian Jiu Jitsu competitor.

"Fighting is honest, raw and real," said Matthew Haché, Maisonneuve’s friend and coach at the Ottawa Academy of Martial Arts.

"I think for someone like Jo, it’s a chance to be herself without any restriction.  Not only is she fierce, but she’s fearless," he said.

"I don’t know where I would be right now if it wasn’t for this. Doing Jiu Jitsu and fighting has given me a path. I had no clue what to do with my life," reflects Maisonneuve. 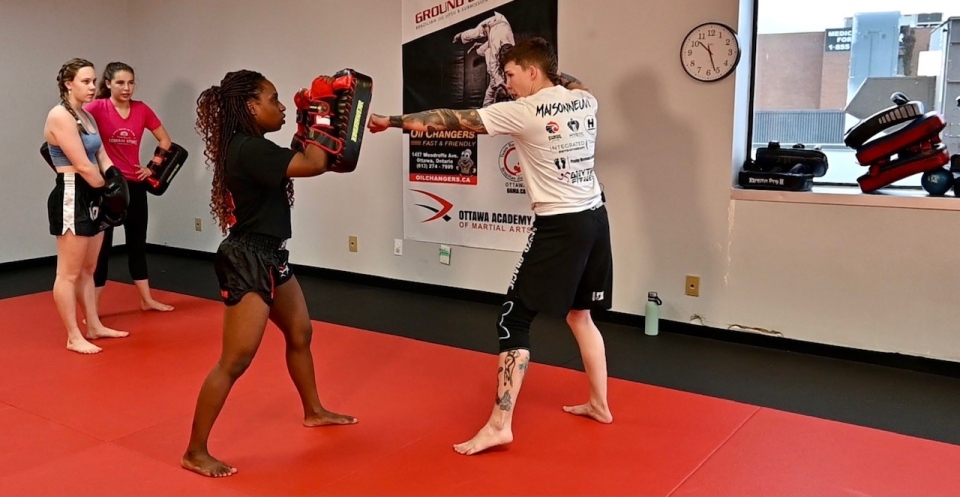 Happy and healthy, Maisonneuve thought nothing would take her off that path.

In 2019, however, two days before competing at the world championships in California, her cancer returned.  Maisonneuve would require treatment again.

At world’s, Maisonneuve won a bronze medal in her division. Then with cancer, and a broken hand, went on to compete in what is called the absolute class.

Coach Matthew Haché is still in awe of Maisonneuve’s tenacity during the match.

"So, many of her opponents were much bigger and larger than her," said Haché.

"Again, she’s doing this not only with cancer, but a broken hand.  And she managed to get gold.  That’s kind of Jo in a nutshell, I guess,” laughs Haché.

Maisonneuve isn’t the only member of her family battling cancer.

“She had tumours on her spine that were cancerous.  They took those tumours out, then she got thyroid cancer. They took her thyroid out and now the tumours are back on her spine.  So, I’m dealing with that,” said an emotional Maisonneuve.

Despite the weight of it all, Maisonneuve’s world also revolves around empowering women through martial arts.  She helps them feel, like her, confident, fit, strong and secure.

"A lot of our members don’t even know what she’s dealing with on a daily basis," said coach and friend Haché.

"She never acts like a victim, or a patient.  It’s never a topic with her.   She wants to help our students.  Her impact on them is far greater than she realizes. She’s an inspiration,” said Haché.

Maisonneuve is again awaiting recent biopsy results and says she has more “procedures” this December.

For now, despite the unknowns, Jo Maisonneuve vows to continue sharing the joy of her trademark smile, and choose life.

More than 8,000 people in our community will be diagnosed with cancer this year.  To support their care, you can donate at ottawacancer.ca.