Helping the homeless and their pets when there's nowhere to go 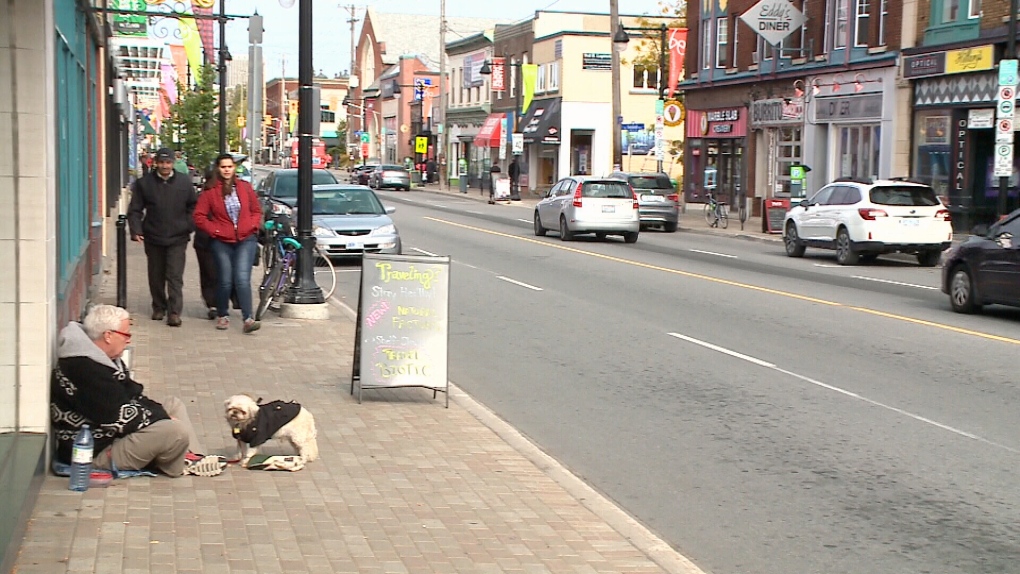 He may be man's best friend but that loyal dog isn't welcome in homeless shelters in Ottawa. As temperatures drop, concerns rise about those living on the streets with their pets and nowhere to go. Whether it's a homeless shelter or a women's shelter the rule in this city is consistent:  no pets allowed.  That can be traumatic for people fleeing their home or for people who have no home.

Most days, you'll find Alan Gemmill on Bank Street in the Glebe, his faithful friend Sidney Crosby by his side.

“I’ll do anything to keep him,” says Gemmill, his cap on the ground, a few coins tossed in, “which is why I’m out here asking for money.”

Gemmell lives in subsidized housing that allows pets.  But not so long ago, he was in a homeless shelter in Ottawa.  His first dog Gizmo couldn't come with.

“I was homeless when I came back from B.C.,” says Gemmill, “I had no place to keep my dog so I had to give him away. It broke my heart, just broke it in two.”

Dog lover Denise Carruthers can understand that, as she walks her dog down Bank Street.

“I think it's a special bond they have,” says Carruthers about homeless people and their pets, “I think a lot of people have given up on them probably in their lives but the animal sitting beside them hasn't.”

Only a couple of homeless shelters in Canada allow pets, in Vancouver and Toronto.   The Ottawa Mission says the challenge is both with space and safety.

“Animals can be well trained with their owners or others,” says Shirley Roy, the Community Relations Manager with the Ottawa Mission, “but if they get in a crowded situation or a chaotic situation, you don't know how they will react, you don't know how people around them are going to react.”

It is estimated that one in 10 homeless people owns a pet.  As the temperature drops, so, too, do their options of where to go.

Enter SafePet Ottawa, a charity aimed at helping women fleeing domestic violence by fostering their pets, looked after by a volunteer while the women get the help they need.  In Ontario, 48% of women delay leaving situations of domestic violence or don’t’ leave at all out of fear that they will have to leave their companion animal behind.

“In the past 3 years, Safe Pet Ottawa has fostered 80 animals, mostly cats and dogs but even one goat,” says Dayna Desmarais with the charitable organization.

The hope of SafePet Ottawa is to expand their reach to others in need.

“If there's no resource, we want to be resource for them,” says Desmarais, “whether it's homelessness, drug abuse or whether they are going into treatment at the Royal Ottawa, we want to be able to help foster their animals as well.”

For now, Alan Gemmill is grateful for the roof over his head that allows him to keep his little buddy.

“He's my only family I have,” says Gemmill, “Everything I ever needed.”

Safe Pet Ottawa is holding a fundraiser October 22 at Tudor Hall.  It’s a masquerade ball.  Details and tickets can be found at https://www.eventbrite.ca/e/the-inaugural-safepet-ottawa-masquerade-ball-tickets-25728991105