‘He’s my hero’: A Kanata boy’s love of a Canadian icon will warm your heart

When you ask Aiden Arjani about his favourite things, you get an answer that will leave you smiling.

The way-too-cute five-year old is in senior kindergarten at Kanata Academy Private School. And after a lesson in September about a Canadian icon, young Aiden developed a new interest.

Aiden’s teacher, Sala Lavoie, says it all started when the students were learning about Terry Fox in preparation for the school fundraising run in his name.

“It’s a hard topic to talk about with children,” Lavoie said. “When you’re sick, you want to know you’re going to get better.”

“We had posters up in the school to help all the kids know about Terry Fox and Aiden would get lost coming back from music class because he was just in awe of Terry Fox,” Lavoie says. “Everything from that moment became about being amazing just like Terry.” 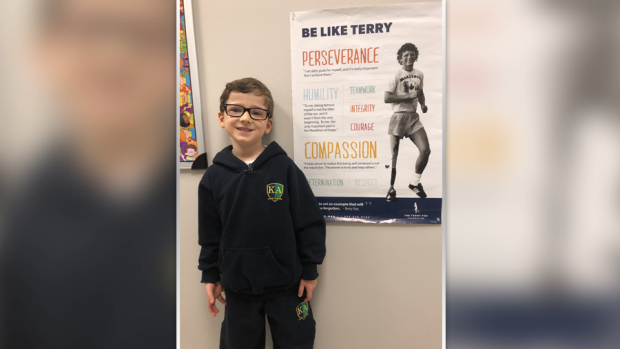 At home and at school Aiden started watching old videos of Terry’s cross-Canada Marathon of Hope,

“He ran across Canada because he had cancer and he wanted to raise money for cancer research,” Aiden says in a tone well beyond his years. “He did it on his right leg and he got a prosthetic one.”

“I just got so into him that I just made pictures to sell for cancer research.”

With the help of his parents Mandy and Neville and big brother Joshua, Aiden started raising money with his artwork.

“I told him I had six frames at home so if he drew me six pictures I’d put them on Facebook,” Mandy says. “I just said if anyone wants to make a donation to let me know and I think in 20-minutes or so they were sold.”

Aiden took the money from his Terry inspired artwork, and the change from his piggy bank, gathering a total of $212.40, and brought it to the bank in a Ziploc bag. The bank gave him a cheque and he sent it off to the Terry Fox Foundation. 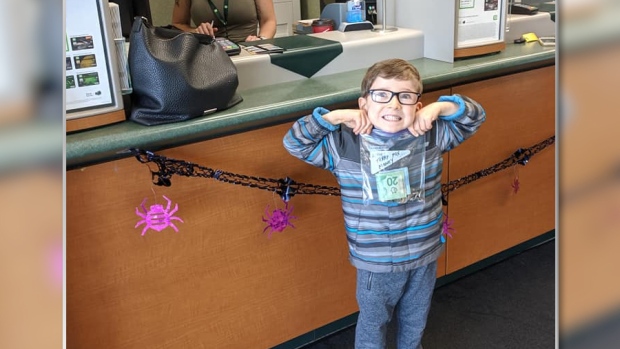 “As a parent you’re kind of flying by the seat of your pants,” dad Neville says. “And you don’t know whether you’re doing right or wrong half the time.”

“This was just a good testament that I think we’re raising two boys who are very kind and gentle and caring, just good humans, so it was a teachable moment for all of us.”

Aiden has big plans for the money he raised, “just so that they (cancer patients) can get better without prosthetics.”

He turns six in January and plans to keep Terry’s legacy going.

“Maybe now I’m gonna sell toys or maybe at my birthday sell (raise) money and whoever sells (raises) money will get a loot bag.”