Gypsy Moth caterpillars are invading parts of Ottawa and Ontario by the millions and the army of insects is munching their way through leaves, stripping trees to their bare branches.

The Gypsy Moth caterpillars, known by their red and blue dots and skin-irritating hairy back, are marching their way across the province in numbers not seen in about a decade.

The non-native insect, which has been in Canada for about 150 years, crawled its way into Ontario during the 1970s and has been living here since. They typically hatch between May and June, and from that point, eat, a lot.

One caterpillar can munch up to 1,000 square centimetres of leaves, about 15 oak leaves. They feast on a variety of trees and this year, the population has exploded.

While you may not notice them, you have likely seen their damage, bare branches.  In a matter of weeks, an army of caterpillars can defoliate an entire tree. 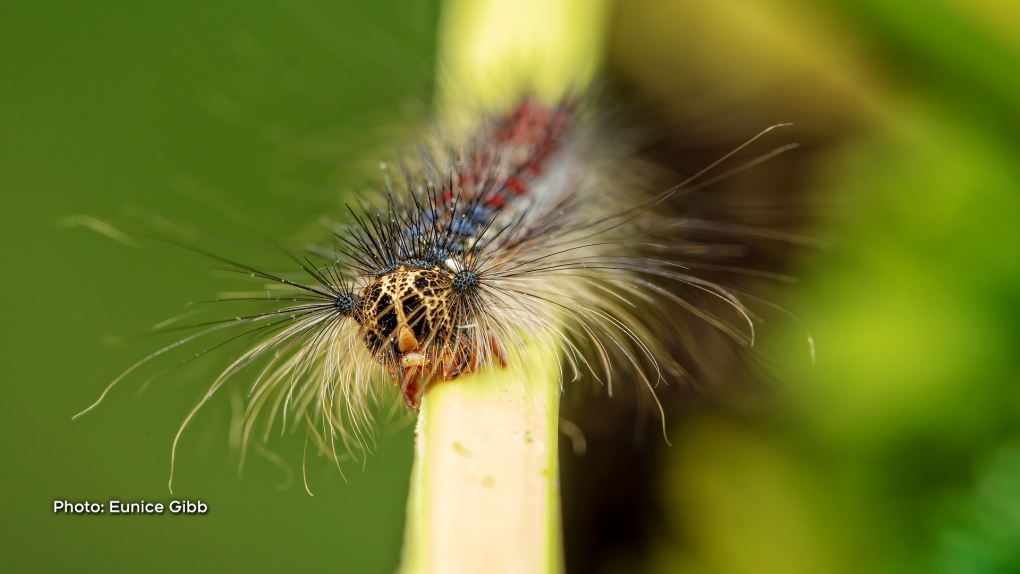 "About a week ago my kids and I went on a bike ride and we biked through Brandtwood Park," says Ottawa resident Candace Newman. "And normally we sit under a tree and we have snacks. We actually looked up to see that the tree was full of caterpillars."

Her children, Alex and Carolyn Knudby, ran through the park to count how many trees had caterpillars, all but two.

"There were these enormous clusters of 20 to 30," says Newman. "The leaves were just covered and there were holes throughout so many of the leaves."

Newman lives nearby and became worried that her trees would face the same fate as those in the park.

The city of Ottawa says they are monitoring the outbreak, but have no plan to use insecticides, Instead, the city provides various options for residents to control the problem, one being to wrap tree trunks in burlap.

Caterpillars can get trapped in the weave as they travel up and down, and it can be tossed away in the compost bin.

Newman has been collecting burlap coffee bean bags from local shops as a cost-effective way to help neighbours who are looking to protect their tree.

"Once they’re done feeding in another week or two then we’re done with the caterpillars and then it will be mostly the moths that we are seeing," says Dr. Christian Schmidt, a research scientist with Agriculture and Agriculture-Food Canada. "The moths don’t even feed as adults, they use up the fat stores that they accumulated as caterpillars to lay eggs and make more caterpillars."

Schmidt says outbreaks like the one we have now happens about every ten years, and predicting whether it will be worse next year is difficult, as there are many environmental factors to consider. Schmidt adds that while the Gypsy Moth, originally from Europe, isn’t ideal for the Canadian ecosystem, they are here to stay.

"It’s detrimental in that they’re taking food away from other native insects that would normally be using the trees that they are defoliating so it’s certainly a stressor on the environment," says Dr. Schmidt. "But the flip side of that coin is that there are native caterpillars, like tent caterpillars, that have been here for thousands of years so the trees are adapted to being above to lose an entire set of leaves and continue their life cycle. It’s very unlikely that gypsy moth outbreaks will kill trees."

If the clumps of creepy crawlers don’t gross you out, maybe this will; if you plan to walk through the forest, you may want to bring an umbrella, because that sound of 'rain' falling to the ground is actually anything but. It’s called frass, and you guessed it, its caterpillar poop.

While RCMP says use of spyware is lawful, it's 'extremely intrusive': former privacy commissioner

While the RCMP says its use of spyware is lawful, there is 'no doubt' the covert collection by police of personal and other information from Canadians' devices 'is an extremely intrusive practice,' says former privacy commissioner Daniel Therrien. 'What's at play is the balancing of privacy and other public interests,' Therrien said Tuesday.

WhatsApp is going to stop letting everyone see when you're online

Two new features being introduced on WhatsApp, which will let you choose who can see when you're active, and to leave groups silently, will start rolling out to all WhatsApp users this month.

WestJet is bringing back 17 new routes that were suspended during the COVID-19 pandemic to help travellers escape the cold this winter.

Canada's top military commander says he plans to 'tweak' the Armed Forces' vaccine requirement in the next few weeks.