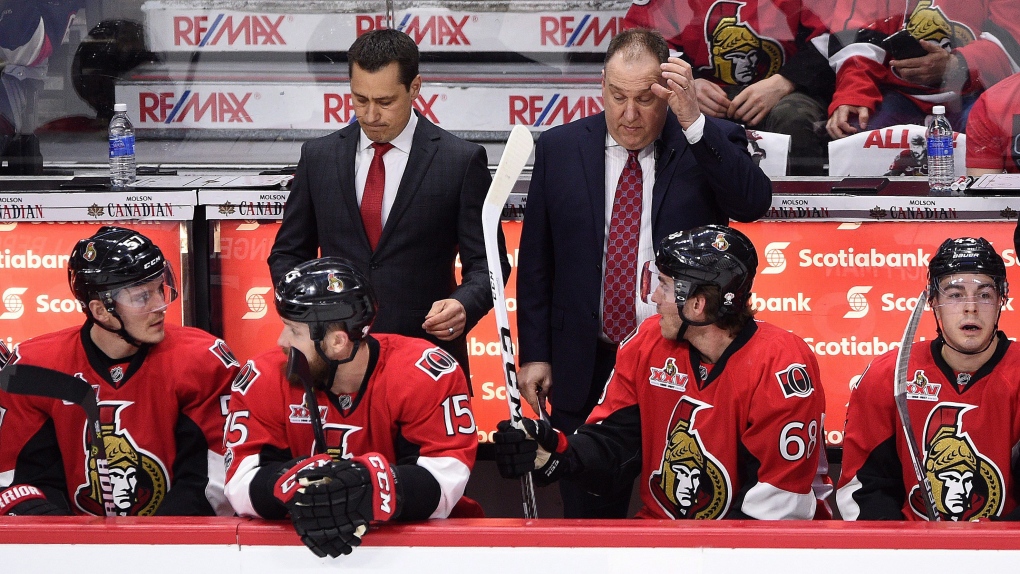 Ottawa head coach Guy Boucher couldn't help but feel like the Senators let an opportunity slip away as the Boston Bruins took Game 1 of their Eastern Conference quarter-final series 2-1 on Wednesday night.

The Senators dominated play for long parts of the game, but a couple mistakes in the third cost them as Brad Marchand scored the winner late in the third period. Frank Vatrano, playing his first NHL playoff game, also scored for the Bruins. Tuukka Rask was solid, making 26 saves.

Bobby Ryan scored the lone goal for Ottawa as Craig Anderson stopped 23 shots. The Senators had a number of chances and know if they want to tie the series Saturday afternoon they will need to find a way to bury them.

Marchand scored the winner on the rebound of a Patrice Bergeron shot with 2:33 remaining in regulation to make it 2-1, shocking the sellout crowd of 18,702 at Canadian Tire Centre.

"I've used the word resiliency a lot and I think it's become a bit of our middle name," said Bruins coach Bruce Cassidy. "We've gone through quite a bit in game and with some injuries and we find a way. I think this group has a lot of character and it starts with the leadership."

Trailing 1-0 and not having registered a shot since the first period, Boston had two quick ones and made the second one count as Vatrano beat Anderson from the high slot as Dominic Moore created the screen to tie the game at 4:55 of the third.

"It's two shifts where we had the puck on many occasions and we had done really well before that in the first two periods so we gave it away," Boucher said.

The Bruins know they were fortunate to come away with the win, especially after being outshot 12-0 in the second period. Boston is the first team to win a playoff game with no shots on goal in any period since the Washington Capitals on May 7, 1994 did it against the New York Rangers.

"They didn't give us a whole lot," said Marchand. "They're really good at keeping things to the outside and making it a one-on-none where they get the puck out quick. We're going to have to be much better than we were (Wednesday). We can't expect to win this series playing like that."

Despite having played the least amount of any player in the first period with just 2:20 of ice time, Ryan was creating chances every time he was on the ice and nothing changed in the second.

Midway through Ryan took the puck off Bruins defenceman Adam McQuaid and went to the net where Rask made the initial save. Ryan pushed his way past Zdeno Chara to the net and scored on his own rebound.

"I've never had a season test my resolve and my patience and all that so much," said Ryan. "I told myself on Monday morning that I had an opportunity for a fresh start, for a chance to forget that regular season and hopefully come with a playoff stretch so I had that on my mind all week and I wanted to put myself in positions (Wednesday) and I did so by moving my feet."

An already depleted Bruins blue-line could be in more trouble. Colin Miller suffered a lower body injury early in the second after being hit by Mark Borowiecki. Miller returned to the game later in the period, but did not play in the third and his status remains unknown.

Cassidy said he's not ruling him out for Saturday, but there is concern.

Boston was also without David Krejci who was a late scratch as he continues to deal with an upper body injury and is considered day-to-day at this point.