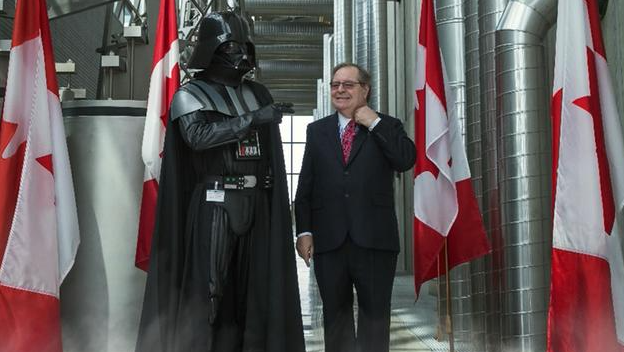 Darth Vader (left) meets with Librarian and Archivist of Canada Guy Berthiaume, May the 4th, 2018. (Library and Archives Canada)

The Government of Canada has announced, on this May the Fourth, that a partnership has been reached between Library and Archives Canada (LAC) and the Galactic Empire.

According to a press release, LAC’s new Gatineau 2 Preservation Facility will be the repository for all future Death Star plans.

This comes following a series of data breaches within the Empire, in which insurgent forces were able to obtain schematics of the planet-destroying weapon. Twice, the Rebel Alliance was successful in destroying the Death Star.

“We consider this alliance a great step forward for Canada’s ongoing preservation,” Guy Berthiaume, Librarian and Archivist of Canada, said in a statement.

His public lauding of the deal was echoed by Imperial representative Darth Vader, a Sith Lord.

“Storing our records in LAC’s state-of-the-art preservation facility assures me that there will be no need for further disintegrations,” Vader said.

Sources say, however, that Berthiaume is privately anxious about the deal. One anonymous staffer quotes Berthiaume saying, “This deal is getting worse all the time!”

LAC says the Gatineau 2 Preservation Facility will be built behind the existing Preservation Centre in Gatineau and, if the procurement process is carried out as planned, construction will start in 2019.

The facility aims to provide a solution to LAC’s ongoing needs for infrastructure that provides appropriate preservation and access space for LAC's analogue archival holdings.