Gearing up for Ottawa's annual Comiccon 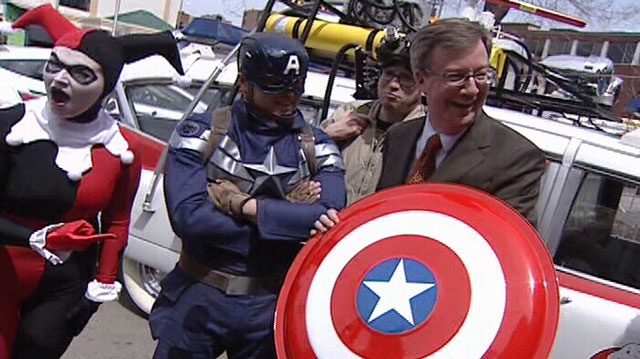 Ottawa mayor Jim Watson spends time with some classic superheroes in the Byward Market ahead of the third annual Ottawa Comiccon, taking place at the EY Centre May 9 to 11, 2014.

If you notice a few ghostbusters, Star Wars characters or Captain America roaming around the Capital this weekend, no need to be alarmed.

Friday marks the beginning of the third annual Ottawa Comiccon, the enormously popular pop culture convention that launched in 2012.

Over 35,000 people are expected to attend this year’s gathering of stars, artists, and geek culture icons.

Bruce Campbell, one of the guests of honour, will be signing autographs, posing for pictures, and answering questions for fans this weekend. The actor is best known for starring as Ash in Sam Raimi’s black comedy Evil Dead movies in the 80s and 90s, where the chainsaw-handed hero takes on hordes of zombies.

Robert Englund is also a famous name in the horror genre, having played supernatural serial killer Freddy Kreuger in the Nightmare on Elm Street movies. Englund will be attending for the whole weekend, so lucky fans may manage to meet both him and Kane Hodder – better known as Jason from Friday the 13th.

Having acted in one of the most successful fantasy series ever, Sean Astin is best known for his role as Samwise Gamgee in The Lord of the Rings trilogy. The actor will also be appearing in the new Guillermo del Toro horror series, The Strain, and will be answering fan questions on Saturday.

Karl Urban will be joining his former co-star, as the Star Trek actor also appeared as Éomer in The Lord of the Rings. Urban will be attending both Saturday and Sunday to answer questions and meet fans.

Also attending will be Christopher Lloyd, widely known for his portrayal of Doc Brown in Back to the Future, and Uncle Fester in The Addams Family. His face will also be familiar to many for his terrifying role as Judge Doom in Who Framed Roger Rabbit.

In addition to actors, the convention will be hosting comic book creators, Storm Troopers, Marty McFly’s time machine, and many other classic comic culture relics.

Ottawa Comiccon will be running from Friday, May 9 until Sunday, May 11 at the EY Centre. There are sure to be plenty of opportunities for photo-ops with costume-clad comic enthusiasts. Visitors are encouraged to continue the tradition of dressing as their favourite characters.