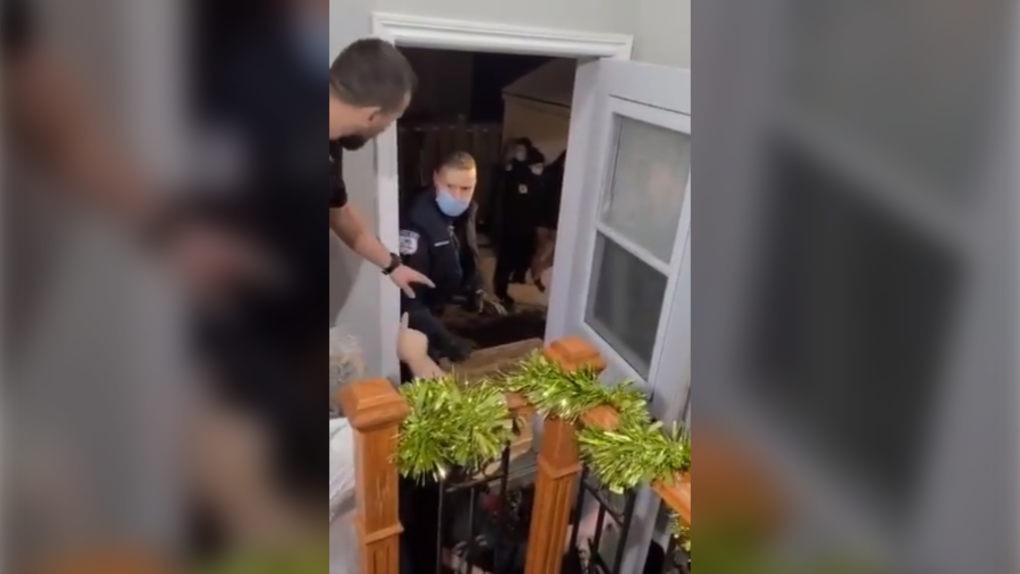 A screen capture of a video posted to social media showing a confrontation between Gatineau police officers and residents after police responded to a complaint about an alleged illegal gathering at a home on New Year's Eve. (Image: @Nusakan007 / Twitter)

GATINEAU, QC. -- Gatineau police say two people were arrested on New Year's Eve and fines have been handed out after a confrontation that started over a gathering in a private home.

Police were called to a home on rue Le Baron at around 11:30 p.m. Thursday after they received a complaint. There, they found six adults inside.

A video posted to social media Friday evening shows a dispute between officers and people inside the home, during which one person is arrested and taken to the ground.

The video appears to show the height of the confrontation.

"At some point, they had no judgement at all. You can't treat people like this," said Mathieu Tessier, who appears in the video.

Tessier tells CTV News Ottawa he got involved after an officer allegedly pulled his mother's arm.

"The truth is...they aggressed us."

In a pair of tweets Saturday, Gatineau police (SPVG) said the video, which had more than 133,000 views on Twitter as of Saturday afternoon, is only part of the story and alleged that one of the people involved assaulted an officer.

"The video shows only an excerpt from the intervention," the SPVG said in French. "The individuals were recalcitrant and refused to cooperate. The individual arrested in the video had assaulted a police officer, hitting him in the face a few times."

An SPVG spokesperson told CTV News that the individual seen in the video was charged with assault and obstructing an officer. The owner of the home was also arrested and charged with refusing to provide personal information.

Both were later released at the scene.

Fines were issued to those in attendance, each for $1,546.

"We ask for your collaboration to continue to respect health measures and collaborate during any police intervention," the SPVG said.