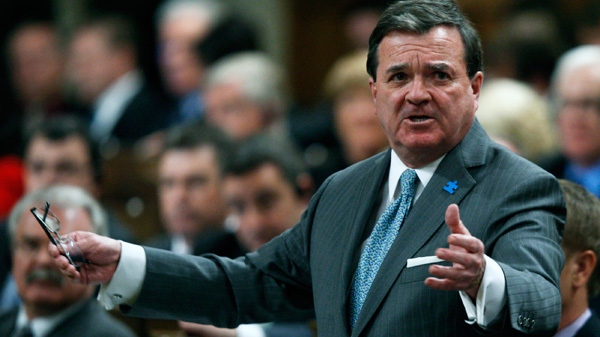 OTTAWA - Those holding their breath to see which programs and services are being axed by the federal budget should exhale.

A complete list is likely never to be proactively provided by the federal government.

Treasury Board President Tony Clement said Wednesday that financial and planning documents to be tabled in Parliament over the next year will reflect the $5.2 billion in cuts.

But those reports traditionally don't lay out where and why the government is cutting, instead outlining what and how it wants to spend.

It will be left to individual departments to determine how much information they want to disclose to those who ask.

Asked why the government is not fully disclosing details, Clement said the opacity can be partially blamed on parliamentary and legal process. That includes the schedule of financial reporting to Parliament as well as union obligations.

"When we don't hide behind a legal process, we are accused of being in contempt," Clement said in a conference call from Brazil, where he is attending international meetings on making government more transparent.

"We've got to stick to a process and that's what our role is and we interpret a process in a particular way. Our opposition may disagree and they cite us for contempt or what have you -- it doesn't mean we just throw process our the window."

The Conservative minority government was found in contempt of Parliament and defeated in a non-confidence vote last year related to their refusal to fully disclose the cost of legislation.

They were returned with a majority government in the subsequent election.

Last month's budget -- the first substantive one of the new government -- said more than 19,000 jobs will be eliminated as the government seeks to slash spending across all departments in a bid to eliminate the deficit.

Many departments are refusing to disclose how they'll save the money, citing the need to first get through job-loss notifications. So word of program cuts are dribbling out via union leaders or those whose grant money has suddenly dried up, and there is no guarantee that more information will be forthcoming.

Clement's defence of silence on budget cuts came as he attended an international conference of the Open Government Partnership.

It's a group of more than 50 countries that have agreed to develop specific commitments on making their governments more transparent and accountable.

Clement says he sees no tension between his push for open government coming at the same time as the Conservatives are under fire for hiding information on budget cuts as well as the cost of fighter jets.

He says the open government plan unveiled last week is about bigger things.

"My goal is to create an architecture of open government that transcends a particular policy debate or discussion. It's more cultural and government-wide," he said.

Canada released a 12-point plan in advance of the meeting, which promises to bring access to government information into the digital age in a bid to increase citizen involvement in decision making.

The plan received a lukewarm welcome from open government advocates who said it stopped well-short of the transformational change required, which includes an overhaul of access-to-information laws.

Clement said that wasn't discussed in the report because the laws are currently being reviewed by committee.

He also said that the government will increase public consultation on the plan and ensure the focus doesn't solely become on making more data available.

Clement said it was the role of civil society to criticize.

"I think it shows that we're all in this together and that Tony Clement didn't emerge down the mountain with stuff chiseled in stone," he said.

"There is always things that can be approved upon and measured and critiqued."

But New Democrat MP Charlie Angus says the Tories have no business even being in Brazil, calling them the most secretive, paranoid government in memory.

"Open government is not Tony Clement's Twitter feeds, it's not putting some more pamphlets on line," Angus said.

"It's about ensuring people have access to the key information that allows us to understand why decisions are being made."