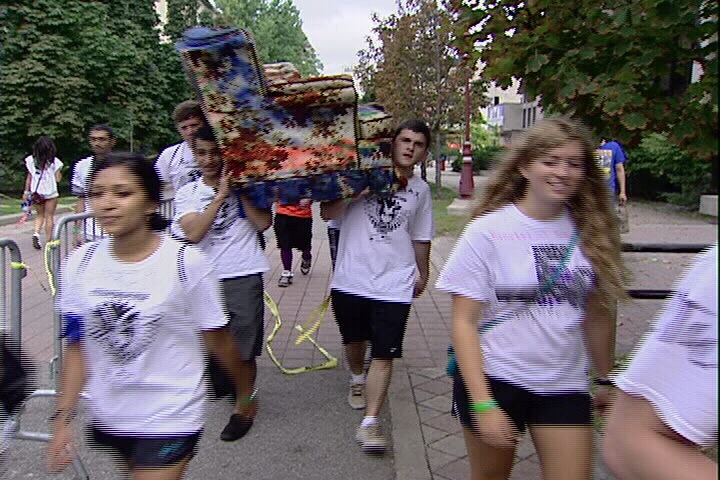 Teams of first year engineering students at the University of Ottawa had to carry a full-sized sofa around as they toured the campus and parts of downtown Ottawa.  "It's one thing to tell them to go around and find said statue or this building. But it's another to get a picture of a couch with it," says organizer and 4th year engineering student Michael Eagar.

It’s known as 101 Week at U Ottawa. But the goal is the same, divide new students up into their respective disciplines and run them through a gauntlet of wacky stunts, weird challenges, wild chants, and various other fun pursuits.

It’s a way for first year students to learn their way around the campus, and to learn they are not alone. "It's a great way for them to meet each other, actually. There are a few things they have to do to get close to each other. Everyone's talking to each other. It's a good ice-breaker," says Christina Cyr, representing the University of Ottawa’s Student Federation.

On day one, students at UOttawa had to do everything from build a human pyramid to thumb wrestle a police officer. Then they attended a carnival complete with a dunk tank and foam-padded jousting.

It’s hardly a dignified first day of higher learning. But it works. “When I moved in yesterday and I didn't know anyone. And I was, like, what am I going to do? But as you go through the different events you meet more friends and kind of get a group. So it's kind of fun," says 1st year business student Vanessa Mangano of Toronto.

Because sometimes the road to a higher education begins with discovering how many people you can fit in a tree.