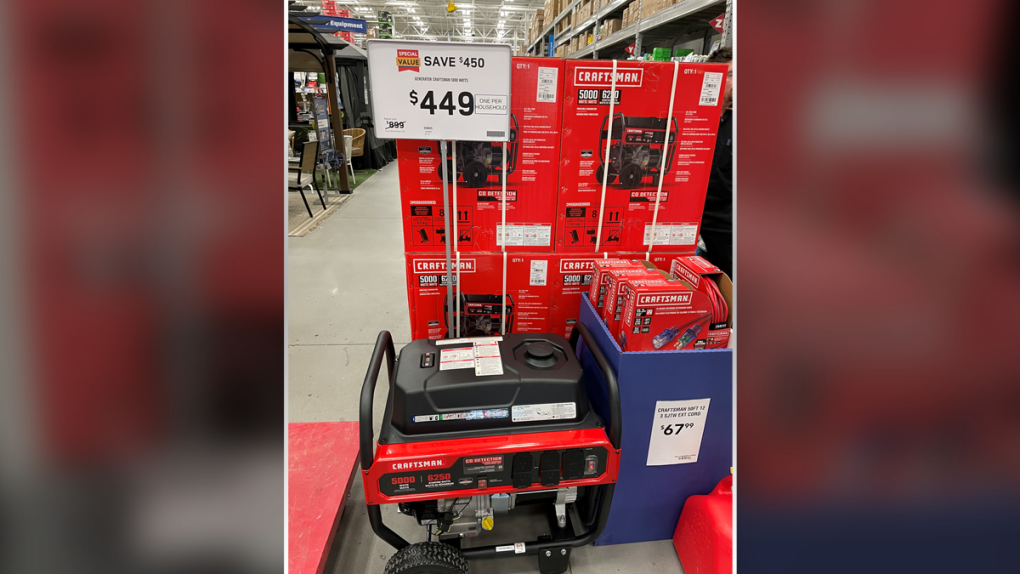 The Lowe's on Hunt Club Road received an 'emergency' shipment of generators on Thursday, five days after a storm knocked out power to thousands in Ottawa. (Peter Szperling/CTV News Ottawa)

The recent storm and the 2018 Tornadoes left thousands of people in Ottawa without electricity; now, are you prepared for the next big outage?

When the storm knocked out power, Ottawa resident Russell Latham got creative.

The inverter, which is connected directly to the car’s battery, generates enough electricity to power essentials, which Latham says he shared with neighbours.

While he cautions this method could be hard on the car’s alternator, he says he it uses about 20 litres of gas per day; and, it’s "much quieter than a generator."

Carr says Thursday morning they had 100 generators, but by 4 p.m. they were down to 16.

"A lot of people are saying they just lost $2,000 worth of food from the fridge and freezer; $400 will save you that, a generator will power your fridge easily and freezer no problem."

The Craftsman model the store was selling was on sale for $449 and runs on gasoline. The cost to fill up is, "about $64 in fuel, it’ll last 15 hours run time, so that’s not too bad," says Carr.

Barrhaven resident Melissa Galla's electricity didn’t come on until Wednesday. After losing all of her food, she’s purchased one.

"We’ve been in our area now for like five years, and this has happened twice; we’ve got two young kids, so at this point we need to be prepared.”

The City of Ottawa has “checklists for emergency preparedness,”and cover what you’ll need; including important family documents, an emergency car kit, a food and water checklist. There is also an Emergency Preparedness Kit, which the website says should include:

After more than four months of ferocious fighting, Russia claimed a key victory: full control over one of the two provinces in Ukraine's eastern industrial heartland.

Hundreds of homes have been inundated in and around Australia's largest city in a flood emergency that was causing trouble for 50,000 people, officials said Tuesday.