OTTAWA -- After a slow, snowy commute across Ottawa today, drivers, cyclists and pedestrians are being warned to brace for slippery roads and sidewalks tonight and Thursday morning.

A freezing rain warning has been issued for Ottawa, calling for up to two millimeters of ice in some locations.

Update: 61 collisions have been reported so far today.#Drivesafely#Otttraffic

A freezing rain warning has been issued for Ottawa tonight and Thursday.

"Ice accumulation may be up to 2 millimeters in some locations before the freezing rain tapers off on Thursday morning."

The forecast calls for periods of rain beginning near midnight. There is a risk of freezing rain this evening and overnight.

The Ottawa Student Transportation Authority said dozens of school buses were delayed or cancelled Wednesday morning and at least three bus routes that picked students up in the morning will not be running in the afternoon.

An OC Transpo bus became stuck Wednesday morning in the intersection of Rideau Street and Sussex Drive. The bus could be seen on a City of Ottawa traffic camera. 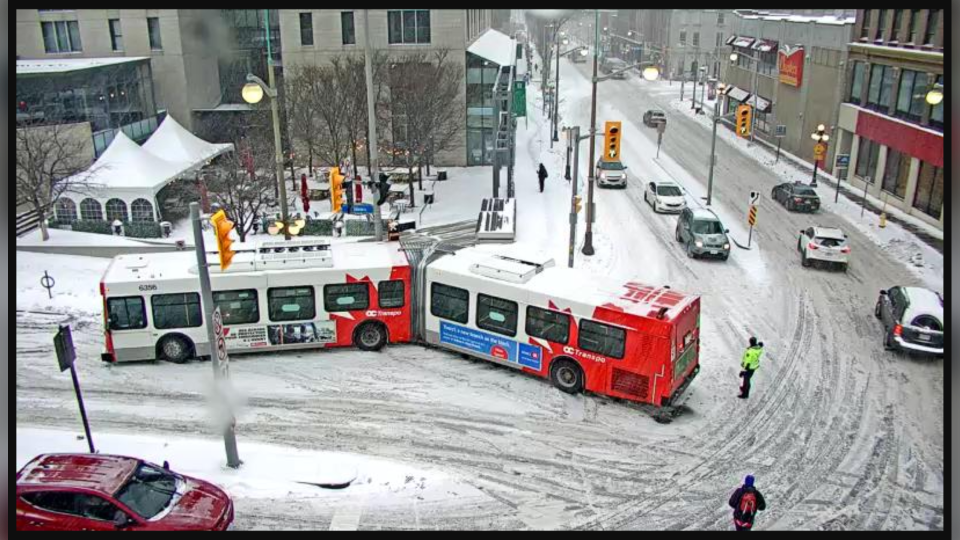 The bus was cleared from the intersection at around 10:30 a.m.

Across eastern Ontario, OPP said they responded to dozens of collisions.

Here is a look at the Environment Canada forecast for Ottawa.

Tonight: Cloudy with a chance of drizzle this evening. Periods of rain beginning late this evening. Risk of freezing rain. Temperature steady near 0C.

Thursday: Periods of rain ending early in the afternoon then cloudy with 40 per cent chance of drizzle. High plus 4C.

Friday's outlook is cloudy with a high of 6C.

The weekend forecast is a mixed bag with clouds and a 30 per cent chance of showers or flurries on Saturday and a bit of sunshine on Sunday.