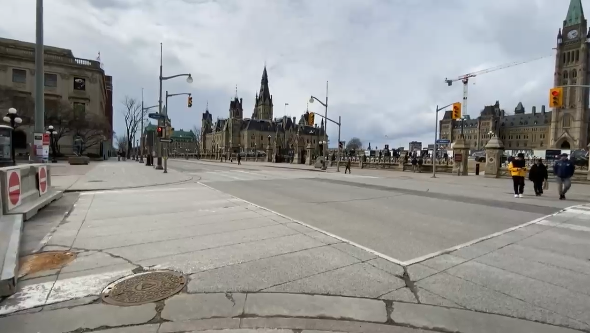 A former Ottawa police chief is calling for Wellington Street to be closed to vehicle access permanently, warning there is a "high risk for a catastrophic event" if vehicles can continue to access the road in front of Parliament Hill.

Sen. Vern White made the comment during an appearance at the House of Commons procedure and house affairs committee that is looking into expanding federal jurisdiction for security of the Parliamentary Precinct to include Wellington Street and Sparks Street.

White served as chief of the Ottawa Police Service from 2007 to 2012. The senator says while there has been many changes to the direct security on Parliament Hill, there has been “little or no change” to the security footprint on Wellington Street.

"The stark reality is that a blast like that what was seen in Oklahoma City, where over 300 buildings were damaged or destroyed and 168 people killed, could very well happen here, if we maintain a lax sense of security on Wellington Street and continue to allow vehicle access directly in front of precinct buildings and, as importantly, of Langevin Building," White said on Thursday.

White said while many will argue the 1995 explosion in Oklahoma City would only happen in the United States, the Toronto 18 terrorism case plotted a series of attacks against targets in southern Ontario.

"As long as vehicles have direct access to this location, we are at risk of large vehicles being used to deliver explosives, and as a result we are at high risk for a catastrophic event happening on Wellington Street."

White recommended closing Wellington Street in front of Parliament Hill and Elgin Street on the western side of the National War Memorial to vehicles to increase security and reduce possible threats.

"The best method to immediately lessen the threat of such an event on Wellington Street is to remove all vehicle access from Wellington Street and the section of Elgin which moves along the side of Langevin, allowing for a buffer zone to be pushed south at least to Sparks and maybe beyond," White said.

"It would have an immediate impact and reduce the gravity of that threat."

White told the committee he spoke with Ottawa City Council in 2014 about closing Wellington Street to vehicle traffic following the shooting death of Cpl. Nathan Cirillo at the National War Memorial.

"I think it's a high-risk location and I think the fact that we continue to allow large vehicles to travel that route has been a problem for us," White said.

"It will alleviate some of that threat, and I think as long as we don't do that we have a continued risk in that location."

White appeared at the committee alongside former Ottawa police Chief Peter Sloly, who agreed Wellington Street in front of Parliament Hill should be closed to vehicles.

Sloly recommended MPs consider changes to the "physical environment" of the area to improve security in the Parliamentary Precinct.

"This might include boundary changes, closing roads to create a pedestrian mall, installing bollards and other barriers to limit vehicular access," Sloly said, calling it "crime prevention through environmental design."

The Ottawa Police Service is the police service of jurisdiction for the Parliamentary Precinct.