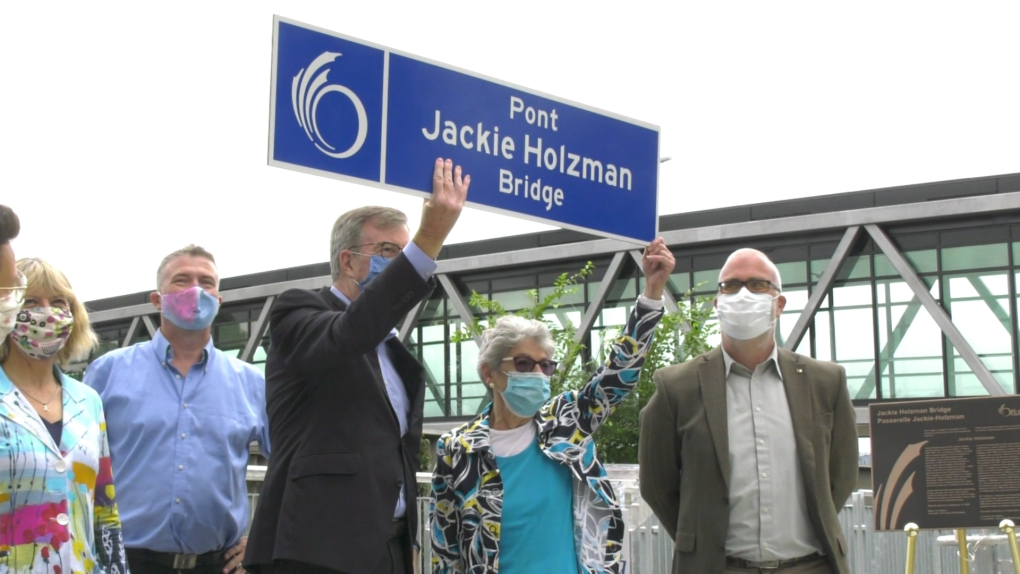 OTTAWA -- The Harmer Avenue Pedestrian Bridge across the Oueensway in west Ottawa got a new name on Thursday.

It’s now called the Jackie Holzman Bridge, named to honour a trailblazer in local politics and the community.

Holzman was mayor of Ottawa from 1991-97 and has been involved in numerous causes including the Ottawa Kiwanis, breast cancer awareness and is a strong voice advocating for persons with disabilities.

“This is amazing. It’s the most incredible thing that’s ever happened to me other than my husband and children,”Holzman said. “That’s what the city is supposed to do: build bridges that bring people together. I hope in my career that’s what I’ve been able to do.”

The celebration was attended by four generations of Holzman’s family, community members, city councilors and two former mayors of Ottawa along with current mayor Jim Watson.

“I had the honour of being first elected when Jackie was elected mayor,” Watson said. “She’s been a tremendous community builder, not just as an elected official but as her time on the board of the NCC, chair of the Ottawa Congress Centre, very active with the Kiwanis Club and she was always a bridge builder, so I thought it was a great idea to name this new bridge over the 417 after Jackie.”

The new bridge has improved accessibility for wheelchairs and features including an enclosed roof, glass panels and lighting. It ties together the communities of Wellington West and the Ottawa Civic Hospital.

Ellen Holzman, Jackie Holzman’s youngest daughter, felt it was a fitting tribute to her mother.

“It’s such a great honour not only for my mum but our whole family,” Ellen said. “As a bridge builder she brought a lot of communities together and she certainly did a lot for persons with disabilities. There were so many things she’s been a part of. I think on council you need to balance different opinions so being a bridge builder is always a good thing.”

At 85, Holzman shows no signs of slowing down. Three years ago, she was one of the co-founders of the group Compassionate Ottawa, which advocates for palliative care and end-of-life options in Ottawa. The volunteer group  has developed programs with workplaces, schools and faith communities and workshops in advance care planning.