For LRT the month from hell: in just 11 days, more than 11 hours of delayed service 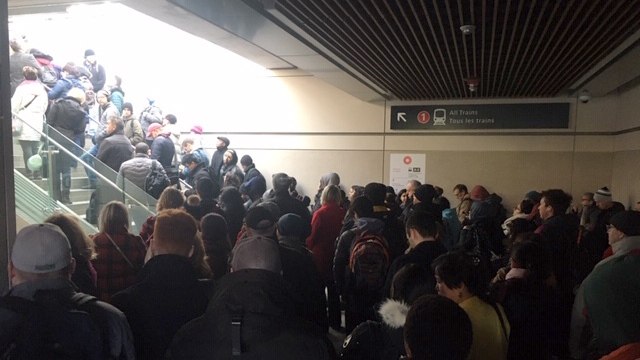 OTTAWA - It wasn’t supposed to be this way. By November, Ottawa’s new, sleek, partially underground 2 billion dollar LRT should have been getting into a groove of city-changing mass transit.

It hasn’t turned out that way.  Not by a longshot.

So far, this has been the November from hell.  Using OC Transpo’s Twitter account and tracking delays, there were 11.65 hours of system delays, in just 11 days.

That calculation is also generous to OC Transpo, because the transit service tweets out a problem, several minutes after it has started.

There are very few signs of real improvement in the train system; in fact it seems to be getting worse.  The month is not even half over and there is no significant snow on the ground yet.

The OC Transpo Twitter account reads like an urban transit planner’s nightmare.  With each “minor delay”, “immobilized train” and apologies for “inconvenience”, a critical period to win over transit users is slipping away.

It started early in the morning on November 1st.

Just before 6 am, there was a problem with a switch at Blair station. The problems continue for more than an hour, with buses diverting from Blair to St. Laurent to ease the pressure on the O-Train.

On top of that, a door faulted at Lees station, causing more delays. Delays do not come to an end until 8:40 am.

On November 2nd there were nearly 25 minutes of recorded delays, after a problem with a switch at Tunney’s station. This required replacement buses to run between Tunney’s and Lyon. The problem was resolved just after 9 am, with delays lingering.

On November 3rd there was a signal issue on line 2 at Carleton station, and replacement buses were deployed. The problems persisted from 8 to 9 am.

Just before 9 am, a train stalled at Blair station, causing delays through the Confederation Line for more than an hour, and replacement bus service ran between Blair and St. Laurent.

On November 4th, something rare: no delays communicated to the public on social media.

The next day at 8:30 am, a train stalled at Blair station, causing minor delays.

November 6th was another clear day. OC Transpo did not tweet about any delays.

On November 7, there were minor delays, after trains didn’t launch on time in the morning.

November 8th was a particularly challenging day on the LRT for transit users. The problems started early with a stalled train between Rideau and Parliament, with replacement bus service launched.

Replacement bus service ended at 8:10 am, with small delays lingering after that.

During the afternoon rush hour, another train stalled at Pimisi. Half an hour later, that problem was cleared.

A short time later, another train was “immobilised” at Rideau station, and the delays linger until nearly 7:30 pm. These two delays during two different rush hours resulted in the system facing delays of more than two hours, in just one day.

The next day was worse.

On Saturday November 9th, a train stalled at Parliament station just before 6:30 am.  All trains in the system had to use the eastbound platforms, which continued for more than 45 minutes after the first stalled train.

At 7:37 am, another train stalled at Lyon station. All trains were pushed to westbound platforms between Parliament and Rideau, slowing things down significantly.

To top it all off, there was a fire alarm issue at Hurdman station just before 8 am. Finally, at 9:39 am, full service is restored after the two stalled trains caused significant delays.

These delays affected the system for more than 3 hours on a Saturday morning. Transit Manager John Manconi reportedly had to “wake people up” at RTG, the company responsible for running the system, to get the trains back on line.

November 10th, OC Transpo did not tweet about any delays on the system.

On Remembrance Day, transit was free for everyone, something the City of Ottawa and OC Transpo had been promoting for weeks.

Unfortunately, again there was an unspecified “issue with a train” at St. Laurent at 7:35 am. Forty-five minutes later, after replacement bus service was deployed, full service on the trains resumed.

One transit rider summed up the feelings of many, imploring mayor Jim Watson to "please bring back the buses."