It's been weeks since Christina Hajjar last stepped inside her Cumberland home that was destroyed in the floods.

“It was a house; it was a home,” she said. “If it wasn’t for the fact that we owe money from the renovations I think we would be okay.”

Hajjar’s home off Leo Lane is just a shell of what it once was. Holes from where photographs once hung are visible throughout the home, with bare walls and stained floors marking where appliances once stood. She was forced to evacuate on May 2, 2017 when flood waters overtook her neighbourhood and filled her home.

“It’s tough if you don’t have a nest egg to start rebuilding,” she said. “ I have to buy a bed, bedsheets, pillows and so much more.”

Hajjar and her family spent 21 days in a hotel before finally finding a rental property in Rockland. Although they are settling in, the family said it will never feel like home. She had content insurance, but Hajjar said her claim was denied because the company said the damage was caused by ground water coming in from outside.

“I guess it’s setting in and I suppose I feel a bit sad. It’s a big part of our life,” said Jeannine Smith, Hajjar’s aunt. “When you live somwehere for fourty years it becomes a big part of your life.”

More than 1,800 homes in Quebec were flooded during the May floods, as well as hundreds in Ottawa, Cumberland, Constance Bay and Rockland, in what officals have called the worst flooding in decades.

Disaster relief is available to residents, but Hajjar’s family said the process in Ontario is too complicated.

“I looked on the internet and the forms that they have, they don’t really apply to the situation sometimes and then you ask yourself, where does this go and where does that go?” said Smith. “There is nobody to ask.”

The Red Cross has recently approved Smith for $5,000 and Hajjar for several hundred, but the amount they are eligible for right now is limited. Smith gifted the second home on her property to Hajjar four years ago, on the condition that Hajjar would pay for and complete all the necessary renovations. But without any official documentation, the red cross and the province are currently viewing the two homes, on the same plot, as one property.

“They are viewing me as a tenant and not an owner,” Hajjar said. “I’m hoping that we don’t have to appeal and fight them so we can get some reimbursement and continue moving forward.”

Although they have maxed their credit cards to help replace what was lost, the family said they are trying to stay positive and focus on all the help the community has given them over the last few months.

“Everyone, everyone was there and I want to thank them,” said John Smith, Hajjar’s uncle. “It kept me alive, I think.”

Hajjar is planning a BBQ fundraiser for Cumberland flood victims at the Kennedy Arena on September 10th. Anyone looking for information is asked to contact: Cumberlandfloodrelief@gmail.com 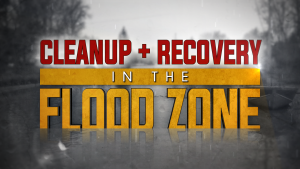