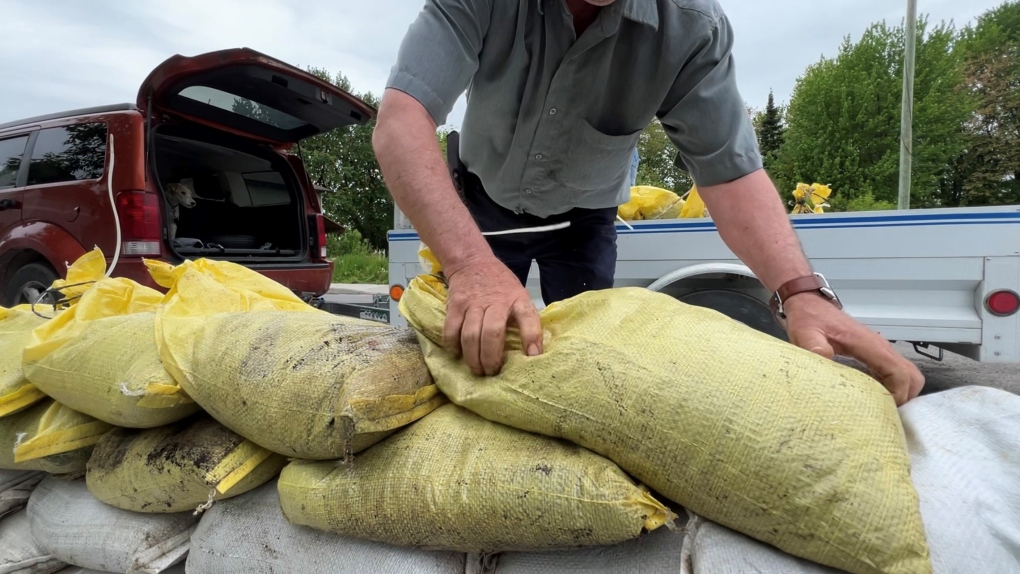 Flood prep is underway in Gatineau as water levels along the Gatineau River are set to rise; there are positive signs though even with more rain on the way.

It is a far too familiar scene for many Gatineau residents who were hit hard during flooding in 2017 and 2019. On Thursday, many spent the day laying sandbags, preparing for the worst but hoping for the best.

Eighty-four-year-old Raymon Bigras lives in Pointe-Gatineau. His daughter and son-in-law spent the day laying sandbags in anticipation of the third flood in six years here.

"You put the bags cross to try and stop the water from coming through, but it's pretty hard not to go through," said Marc Charron, Bigras son-in-law.

"He doesn't want to leave this place, he's born here and he wants to stay here," his daughter Joanne said.

It’s nothing new for Bigras – he was born during a flood in 1937 and has lived through many more since.

The region of Pointe-Gatineau was hit hard both in 2017 and 2019, but Thursday the city of Gatineau provided a positive update.

"At this point, water levels are stable, according to Hydro Quebec the forecasted increase in the level of the Gatineau River is estimated at 40 cm at the Alonso Bridge, although this is encouraging news, we must remain vigilant," said Gatineau’s Mayor France Belisle during a press conference Thursday.

Water has already been released from the Baskatong Reservoir, which has reached capacity. Rain in the forecast could change the situation quickly.

Sand bagging stations have been set up throughout Gatineau to help residents.

"Come get some bags, if you're not prepared, you’ll get flooded," said volunteer Yves Legare.

On Rue Moreau near St. Louis Street, one of the hardest hit areas in the last flood, residents aren't taking any chances.

Cheryl Frech is building a three-foot wall all the way down the street.

"We're going all the way to St. Louis, because we have some neighbours that are older and they can't do it," she said.

Recent flooding in the area is still fresh in their minds.

Planning a road trip? Here's how to save money on gas this summer

As gas prices slightly trend down this week after some of the highest national averages seen in recent months, some Canadians may be thinking twice before planning their usual summer road trip plans. CTVNews.ca looks at how drivers can save at the pumps while travelling.

OPINION | How much of a mortgage can I afford in Canada?

Prices have been easing slightly recently, but affording a mortgage is still a very difficult task for many Canadians. How much of a mortgage can you afford? Contributor Christopher Liew breaks it down in an exclusive column for CTVNews.ca.

A federal judge Wednesday sentenced Jerry Harris, a former star of the Netflix documentary series 'Cheer,' to 12 years in prison for coercing teenage boys to send him obscene photos and videos of themselves and soliciting sex from minors at cheerleading competitions.