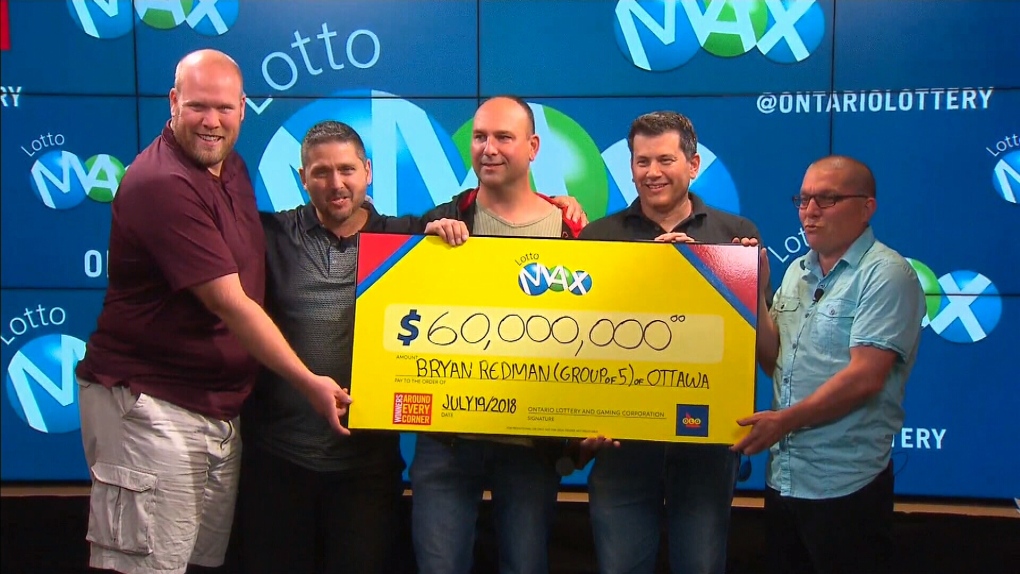 A group of five Ottawa-area IT professionals are splitting the $60 million jackpot from last week's Lotto Max draw.

Bryan Redman of Ottawa, Christopher Beazley of Carleton Place, Gilles Dionne of Gatineau, Norman MacDonald of Gatineau and Stephane Dionne of Embrun are splitting the prize five ways. It's the largest ever lottery prize claimed in Ottawa.

The men were introduced at a news conference in Toronto on Thursday.

The men started playing the lottery as a group more than 10 years ago, when they all worked together, and continued to play the lottery together as a way to stay in touch. The men are all married and have nine children between them.

The winning ticket was purchased at Mr. Gas on Innes Road in Orleans.

“It was my week to purchase a ticket," Bryan Redman said in a news release. "I almost forgot but remembered to pick one up last Friday when I was nearly out of gas.

"I checked our ticket the next morning on the OLG Lottery App and was stunned when I saw ‘$60,000,000’ on the screen. I scanned it again immediately because I just couldn’t believe it.”

Redman drove to the closest lottery retailer to check his ticket on the Ticket Checker. Then, he started phoning the rest of the group from his car.

The group met up that evening to validate the ticket