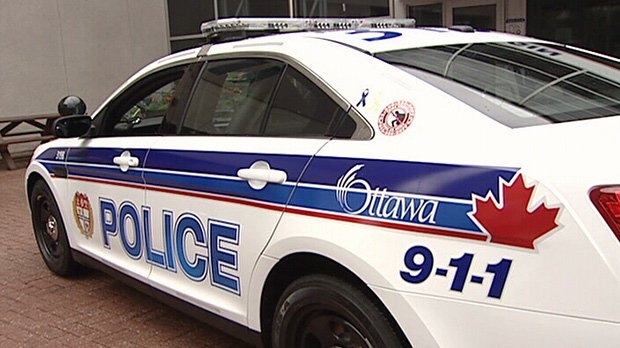 “These are nefarious individuals.”

Patterson says the arrests were the culmination of an investigation into gun crime that began in January. One of the suspects had been wanted on an outstanding warrant in connection with a shooting near Algonquin College last summer.

Four men were in a car in the Baseline and Fisher area Friday, at around 1:15 p.m., when police attempted to stop them. The men tried to flee the scene at first by ramming the police vehicle, but they were pinned into the parking lot of the strip mall there, just across the street from the Experimental Farm. They got out of the car and ran, and were chased by officers before being arrested.

One officer suffered minor cuts to his hand during the arrests, another ruptured his Achilles tendons during the chase and is in hospital for surgery, Patterson said.

“He collapsed in the middle of the street and we actually had a citizen stop and help him and actually gave the officer a cell phone to call 911 and get an ambulance there,” he said. “It’s kind acts like that that shows encouragement for our officers.”

Our heartfelt thanks go out to Mr. Johnny Raposo who stopped to offer one of our officers assistance after his achilles ruptured during this incident. The officer is recovering and doing well. https://t.co/EZJTKe1sVf

According to a news release from Ottawa Police, the five men are facing 92 criminal charges and Patterson says there could be more. The investigation is ongoing.

“These people that we arrested, they are high-profile offenders within our city,” Patterson said. “These are very nefarious individuals who are brazen in relation to the shootings that we believe they are responsible for.”

Patterson says, when they were arrested, two loaded handguns were seized, along with a quantity of cocaine. Search warrants at the suspects’ homes turned up two more guns and quantities of other drugs, including crack, marijuana, and fentanyl, as well as cash.

“I can unequivocally say our city is a safer place as a result of these guys being incarcerated at this time,” Patterson said. “If it wasn’t for the intelligent work of our guns and gangs unit, our drug unit, our Direct Action Response Team members, members of the intelligence section, we wouldn’t be holding these guys accountable.”