KEMPTVILLE, ONT. -- Mark Tedeschini is a retired Ottawa firefighter who is fanning the flames of creativity.

"A couple of years before I retired, I found this place and I really fell in love with it, especially the barn," said the 60-year-old.

"And I’ve been banging on the anvil for the better part of ten years now, or more."

He was on the job with the Ottawa Fire Service for 30 years. He called it his dream career.

"It’s all I ever really wanted to do since I was six-years-old.  My neighbours were firemen. I loved firetrucks, the coats, I was in love with it. And as soon as I got out of high school, I applied."

“Now, I’m playing with fire, instead of putting it out,” he laughed. While Tedeschini’s shop is home to his artistic pursuits, it’s also a place to extinguish the pain and trauma of his career. Accidents, injuries, and stress have left lasting physical and emotional scars.

"I was severely injured at a fire, and a couple of years later, I got hurt again. And that really sunk me psychologically," he said.

"That started the PTSD path and eventually, I had to leave early because of the injuries. I was burnt out.

"My mantra has always been to try and do something positive out of the darkness. I have a sign in the shop that says “one day at a time” and that’s what it is. Any of the firefighters, or first responders out there, know what it’s like, I don’t have to explain it, I take it one day at a time," Tedeschini.

"Some days I can’t get going, and then others, I come in here like a bear. It’s ridiculous but I love it," he said with a smile. 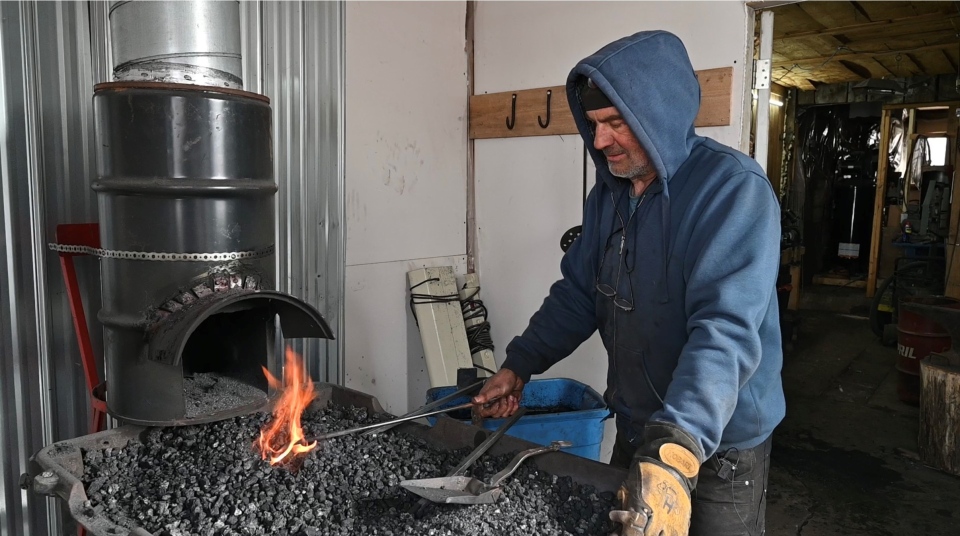 Tedeschini is working at his propane and coal forges almost every day. His shop is in a 150-year-old post and beam barn that he refurbished with his father.

"Back in the day, a lot of farms had their own blacksmith shops set up, so there’s a lot of steel laying around and a lot of pieces of wrought iron. I started making furniture out of barnboard and I wanted to incorporate the steel into it, so I decided to start blacksmithing," Tedeschini said.

"I started with a small anvil and an old propane forge and went from there. And it just grew and grew," he said.

"Now, I find I can be swinging away for an hour and not think of anything except trying to get that piece right. And if I don’t, it goes out to the pile and you put another piece of steel in the fire." His outdoor camping and cowboy cooksets are in hot demand.  He attributes their popularity to the television series 'Yellowstone'.

"I’m watching it and it’s there - the cowboy cook set - the one I’ve got is pretty much the same thing. It’s got a rotating grill and hooks to hang pots and pans on. That’s definitely my most popular item," Tedeschini said.

"The tripod version has a trammel hook so you can adjust the height of the pot over the fire and there are two grills, one for putting your coffee pot on, and if you want to cook steaks or hamburgers, there’s a second grill that fits inside it. That’s my most popular item."

Tedeschini gives blacksmithing demonstrations at farmer’s markets and arts and crafts shows. He hopes his journey inspires other first responders, with stories of pain, to find their own paths of healing and hope.

"If you’re in the same sort of situation I was in, maybe you had a bad injury, try and find that one thing that you can sink your teeth into. It might not work for you today, but if you search for it, you’ll find it. I stumbled into it by chance and it worked out for me.