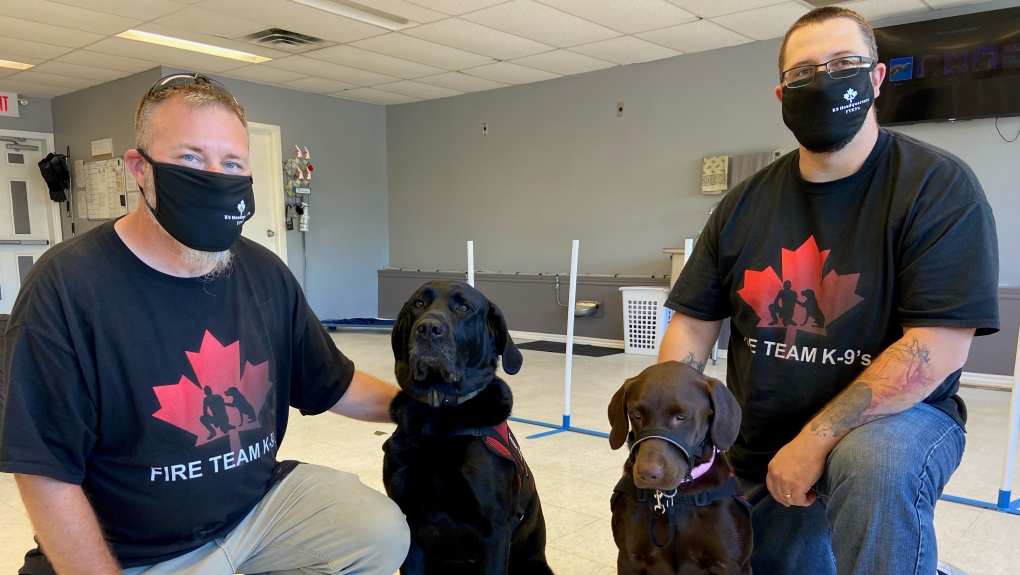 PEMBROKE, ONT. -- On a day that brings back flashes of trauma or anxiety for some, Fire Team K-9's, a non-profit organization in Pembroke, Ont., has persevered through the pandemic to continue providing service dogs to those living with PTSD.

For Louis Pelletier, his service dog Bristol has changed his life.

"I didn't leave my basement for multiple years because I could not do public," Pelletier tells CTV News. "I had some traumatic events that caused me to, let's say, take a knee at one point, because I had 18 years of career done and multiple deployments."

Pelletier has been a client at Fire Team K-9's for more than four months and doesn't go anywhere without his trusted companion.

"She does not leave my side," says Pelletier. "She will alert me at any time if my anxiety gets too high, or I have a little panic attack."

"When COVID hit, we had all these dogs in training but no place to train them," says Jeff Hinch, president of Fire Team K-9's, "so, we took a gamble and opened this place up."

Hinch is a 23-year veteran himself, having served three tours in Afghanistan. He started Fire Team K-9's four years ago with his service dogc, Judah, alongside him.

Working alongside Hinch is his wife Jen, who is the director of operations and animal welfare at Fire Team K-9's.

"Getting my husband's service dog, Judah, it was the missing puzzle piece and I like to tell everyone that Judah actually gave me my family back," says Jen. She says the last year has been difficult for the organization between the pandemic and losing their vice-president to cancer.

But she also thanks the community for making the new venture a success. Being so near to CFB Petawawa, she is eager and motivated to work through their long list of applicants.

"Without Judah I don't know where we'd be," says Jen. "When I see the difference it makes, it's what keeps us going and I just want to get as many dogs to as many veterans as possible so that they can get a new lease on life as well and get back to where they were."