A massive blaze at Argos Carpets on Merivale Road has caused $5 million in damage, including $3 million to the building.

Ottawa fire was called to the scene around midnight.  Crews were unable to gain access to the building and heavy equipment was brought in to knock it down.

One firefighter was treated for heat exhaustion.

The fire was put out around 6 Wednesday morning.

Emergency crews are likely to remain on scene until after noon.

The cause of the blaze remains under investigation.

Argos Carpets is owned by Peter Foustanellas, a well-known Ottawa businessman and philanthropist. 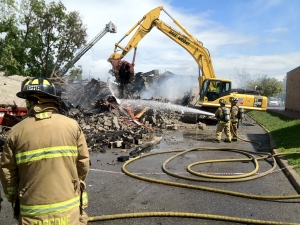 A midnight blaze has destroyed Argos Carpets in south-west Ottawa.