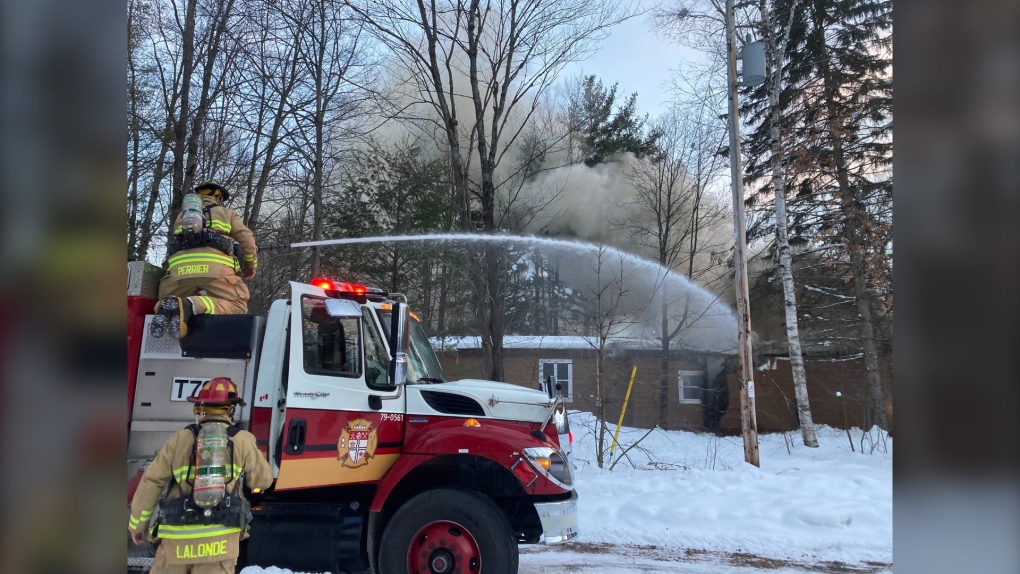 OTTAWA -- Investigators are searching for the cause of a fire that damaged a wooden classroom structure at the Ottawa Carleton District School Board's outdoor education centre in Ottawa's east end.

Ottawa Fire Services received a 911 call at 3:44 p.m. Friday, reporting flames visible from a structure at the MacSkimming Outdoor Education Centre on Hwy. 174.

Ottawa fire says the staff member who called 911 confirmed there were no people inside the structure, and told the 911 operator that the flames had travelled up the wall and through the roof of the building.

The fire quickly spread through the attic of the structure, and firefighters were forced to evacuate the building after the roof began to collapse.

Firefighters were forced to evacuate when a section of the roof collapsed and are now battling the fire from the exterior. Firefighters are using an all terrain vehicle to shuttle personnel and equipment to the scene. #OttFire #OttTraffic https://t.co/GKb5KcDJT3 pic.twitter.com/nGZEAzPrfj

In a media release, Ottawa fire said firefighters used tanker vehicles to shuttle water from a nearby fill site and pumped it up the long laneway to the structure. An all-terrain vehicle was used to shuttle personnel and equipment to the scene.

An Ottawa Fire Services investigator has been called in to investigate the cause of the fire.

The Ottawa Carleton District School Board says one classroom building was affected by the fire.

"The building is a wooden structure and came down due to the fire," said a statement from the OCDSB Friday night. "The building was empty at the time and no injuries were reported."

According to the OCDSB, the MacSkimming Outdoor Education Centre is a 425 acre outdoor classroom. The centre is used by school classes, overnight and weekend groups.

The centre was established in 1967 and is named after William MacSkimming, who was Director of Education in 1966 with the Ottawa Board of Education.

"The primary focus of this OCDSB educational facility is to provide active inquiry-based learning opportunities and curriculum-based experiences to elementary and secondary students, to explore, appreciate and learn about the Ontario Curriculum in a beautiful natural biodiverse setting," said the OCDSB.