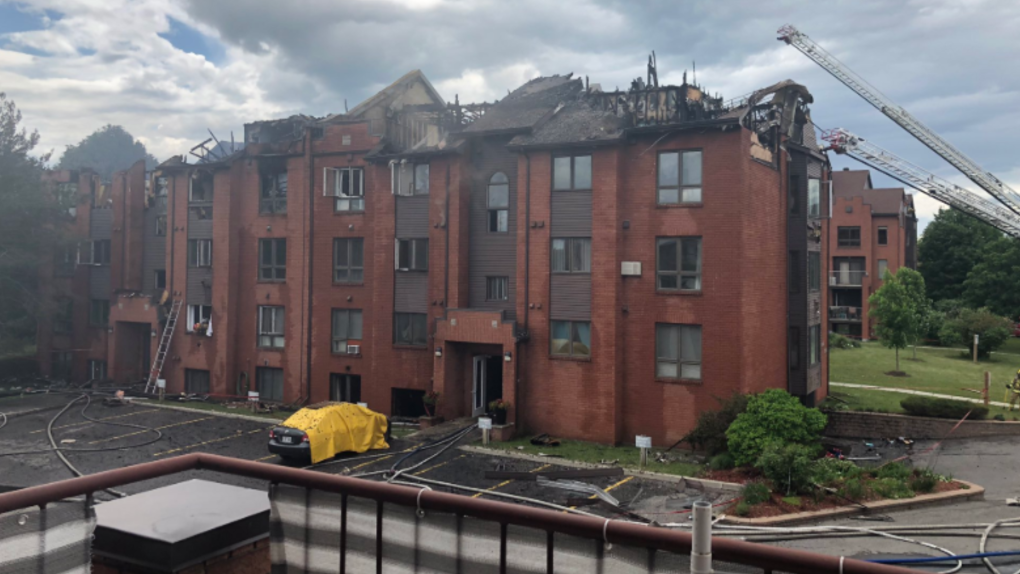 A fire is out at a condo building on rue de Morency in Gatineau, June 6, 2020. (Photo courtesy of Melanie Brousseau)

GATINEAU, QC. -- Investigators are searching for the cause of a major fire that badly damaged a condo building in Gatineau.

The fire was at 164 rue de Morency. Gatineau Fire was called to the scene at 9:45 a.m. Saturday. Thick, black smoke and flames could be seen shooting from the roof of the 16-unit building.

It took 50 firefighters almost nine hours to get the blaze under control. The cost of the damage is estimated at $2.5 million.

Melanie Brousseau, who lives in a condo building next door, tells CTVNewsOttawa.ca that she noticed the fire just after 9:30 a.m., and saw that it was spreading quickly.

She quickly called 9-1-1 while her boyfriend, Tom Brownrigg, ran out to warn their neighbours. She says he and two other men knocked on doors and windows to warn the residents about the fire. They believe everyone was able to make it outside safely.

Gatineau Fire says 12 people were evacuated and no one was injured.

An STO bus was sent to house evacuated residents while firefighters battled the flames.

What caused the fire is unknown. Gatineau Police are involved with the investigation.

This is the same street where, just over two years ago, a major fire displaced 20 people and caused more than one million dollars in damage. The street is lined with several condo buildings of the same design.