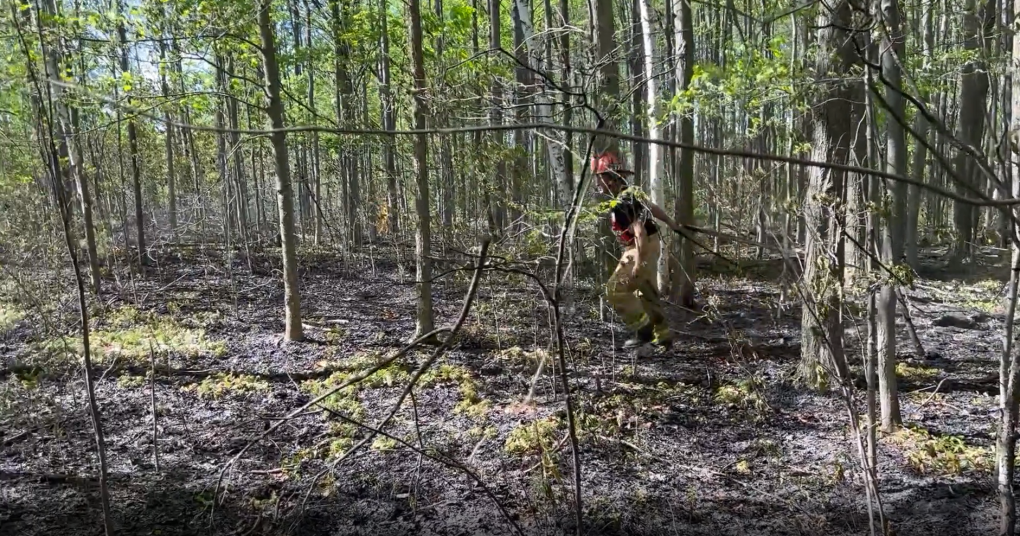 Ottawa fire says firefighters responded to a brush fire off of Wilhaven Drive in Cumberland on Saturday. (Ottawa Fire Service/Twitter)

Two firefighters were treated for heat exhaustion after battling a brush fire in Cumberland.

"The fire was approximately 3 acres in size when it started," Ottawa fire said on Twitter.

"Firefighters have controlled the perimeter. You can see all the burnt ashes on the ground."

A total of 20 trees had to be cut down due to the fire.

The temperature hit 30.5 C Saturday afternoon in Ottawa, with the humidex making it feel like 35 degrees.

The fire was approximately 3 acres in size when it started. @OttFire Firefighters have controlled the perimeter. You can see all the burnt ashes on the ground. Firefighters are still hitting hot spots. #OttNews pic.twitter.com/dxRbsryHWg

Fire officials say two firefighters were assesses by paramedics at the scene for heat exhaustion.

"Fighting fires in this heat is extremely dangerous. Proper rehabilitation and hydration in crucial."

Firefighters have battled several brush fires in Ottawa this week, as temperatures have hit 30 degrees for three straight days.

On Wednesday, firefighters responded to four brush fires, including one that burned four acres of a cornfield on Shea Road.

All open air fires are prohibited during a ban, including properties that have an Open Air Fire Permit. This ban applies to agricultural burns, brush pile burns, as well as campfires and wood burning outdoor fireplaces. Devices which do not require a permit such as propane, ethanol, and natural gas outdoor fireplaces and barbecues are not included in the ban.

@OttFire Firefighters are cutting down parts of trees where necessary to hit hot spots. #OttNews pic.twitter.com/wDsL4baL5Q