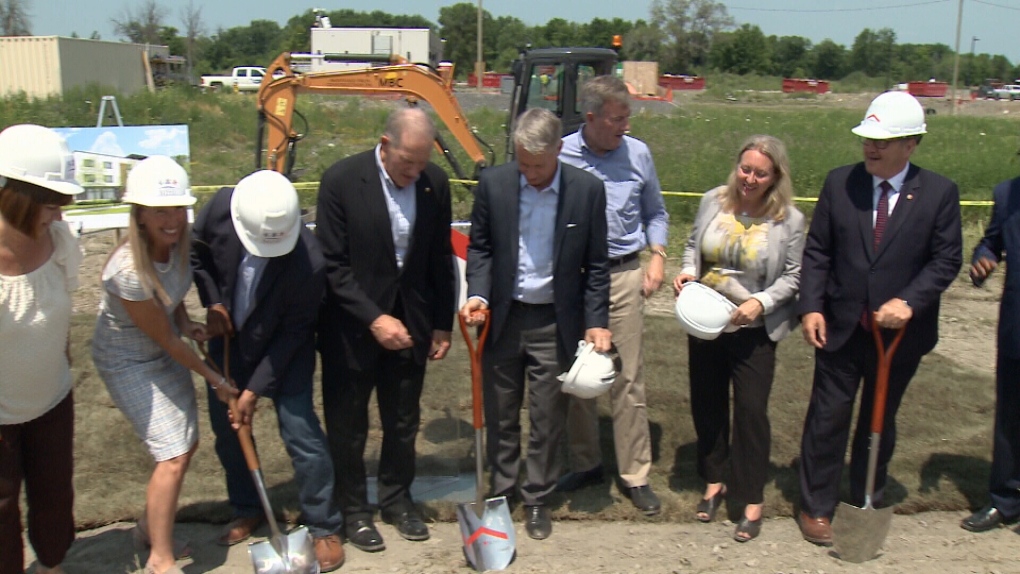 An affordable housing project for homeless veterans got a financial boost from the federal government today.

Vets House is a 40-unit project on the grounds of the former airforce base at CFB Rockcliffe.

This is an $11.5-million dollar build financed in large part through donations. But today, the federal government committed to providing more than half the funds as shovels go in the ground in the next few days.

It's little more than a pile of dirt but the hope is that by Remembrance Day of next year, the field on Mikinak Road will be transformed into a 3-storey, 40-unit facility designed specifically for homeless vets with all the accompanying supports they may need.

“We'll be bringing veterans in from shelters, we're going to bring them in from the streets,” Suzanne Le, the Executive Director of Multifaith Housing Initiative said at a news conference at the site today, “We will wrap them with the supports that they need to be to be successful people once again, to be proud of who they are and what they're doing.”

Built on the grounds of the former Rockcliffe air force base, the $11.5 million dollar facility will provide both shelter and services, with more than half that money, $6.5 million, coming from the federal government.

“This will be the first of its kind in Canada,” said Andrew Leslie, the Liberal MP for Orleans and a retired Lieutenant-General with the Canadian Forces, “and I think everyone should want to have more of these across Canada to better give love, support, care and infrastructure to those veterans who come home broken in mind, body or in spirit.”

It's difficult to determine just how many veterans are homeless in Ottawa but the Multifaith Housing Initiative which is backing Vets House says some studies show that as many as 65 veterans a day lack proper housing in this city.

Our story last month about a homeless veteran living in her van highlighted just how desperate the situation is for some.  Diane Claveau, a graduate of the Royal Military College, told CTV news in June that she hoped to live at the Vets House one day.

“This would be such a nice place for us,” said Claveau, “because we're alike; we can talk army stuff.  I hope they're going to build it and I hope I can live there one day.”

Suzanne Le says it will be built and that the plan is to use this as a pilot project to build many more across the country.

“We need veterans to know we are grateful for their service,” Le said, “and that we have not forgotten them.”

It will take about 14 months to build Vets House.  Le says Diane Claveau would be more than welcome to live there but hopes that she will have found a home well before that.