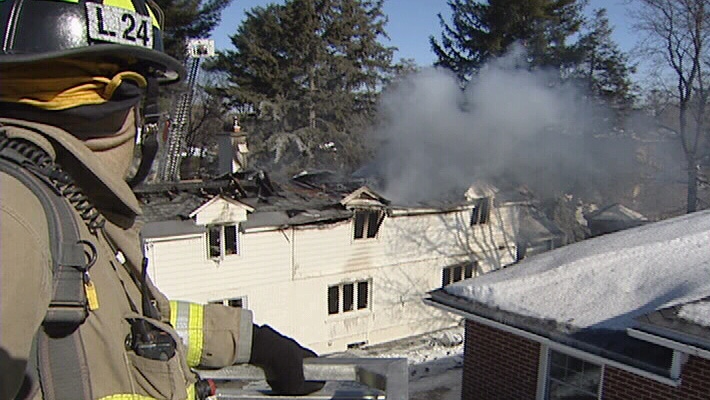 Three people have been displaced following a major fire at a two-storey family home in the Westboro area.

Firefighters discovered the blaze at 546 Kenwood Ave. at around 4:45 a.m. after a couple down the street on Hillcrest Ave. called, smelling smoke.

“The smell of the smoke woke her up, and it was quite strong,” said Kevin Clinton. “I thought it was coming from inside our house.”

Firefighters checked the area and discovered flames pouring out of the home on Kenwood Ave.

“When we arrived on scene it was already burnt through the main floor and already going through the second,” said Marc Messier of the Ottawa Fire Services.

A couple, their teenage son, and the family dog lived in the home. No one was there at the time the fire broke out. They had left Friday for a weekend trip to Toronto.

“They called and said they’d just had a peculiar phone call, and could I look out my window and see if everything was ok,” explained Rod Lahey, who lives across the street from 546 Kenwood Ave. “I just said ‘are you sitting down? Basically your house is gone.’”

Neighbours said at one point the flames were thirty feet high.

“We were fast asleep and our neighbour across the street phoned,” said Jean Wu, who can see the Kenwood Ave. home from the back of her house down the street. “Our upstairs phone is at the back of the house, so we went to get the phone and it was like a blazing inferno out the back,” she said.

Neighbours said the home had recently been renovated, and that the family had lived there for more than 10 years.

The family was driving back from Toronto after hearing about the fire.

The blaze left the home structurally unsafe, leaving firefighters to battle the flames from outside.

One firefighter suffered minor smoke inhalation at the scene.

The cause of the fire is still under investigation. Damage is estimated to be at least $600,000.

With files from CTV’s Claudia Cautillo