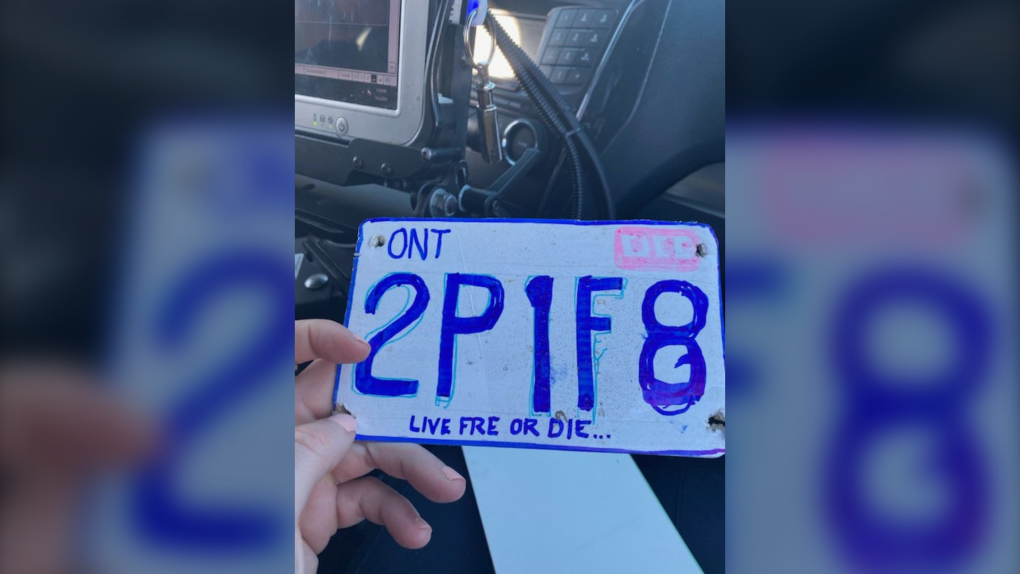 KINGSTON -- Kingston police say a motorcycle driver was charged accordingly and received an 'F' for spelling after officers found a homemade licence plate attached to the bike.

Sgt. Steve Koopman tweeted a picture of the fake licence plate this week.

The licence plate '2P1F8' included the slogan at the bottom, "Live Fre or Die…'

"We apparently have some burgeoning artists in #YKG. Patron officers again snagged this beauty off a motorcycle," said Koopman on Twitter.

"Charged accordingly and given an 'A' for effort but an 'F' for spelling."

We apparently have some burgeoning artists in #ygk. Patrol officers again snagged this beauty off of a motorcycle. Charged accordingly and given an ‘A’ for effort but an ‘F’ for spelling. #LiveFreOrDie #NewHampshireNorth pic.twitter.com/FBVxQwvG8K

Sgt. Koopman's tweet of the fake licence plate caught the attention of Jimmy Fallon and The Tonight Show.

"At first, he tried to bribe the police by handing him a post-it note that said $20 on it," said Fallon. "Then it got even worse, when he handed the officer his driver's licence."

It's the second time this month Kingston police found an unusual licence plate on a vehicle.

On March 8, Sgt. Koopman shared a photo of a licence plate stopped for multiple issues, including improper plates.