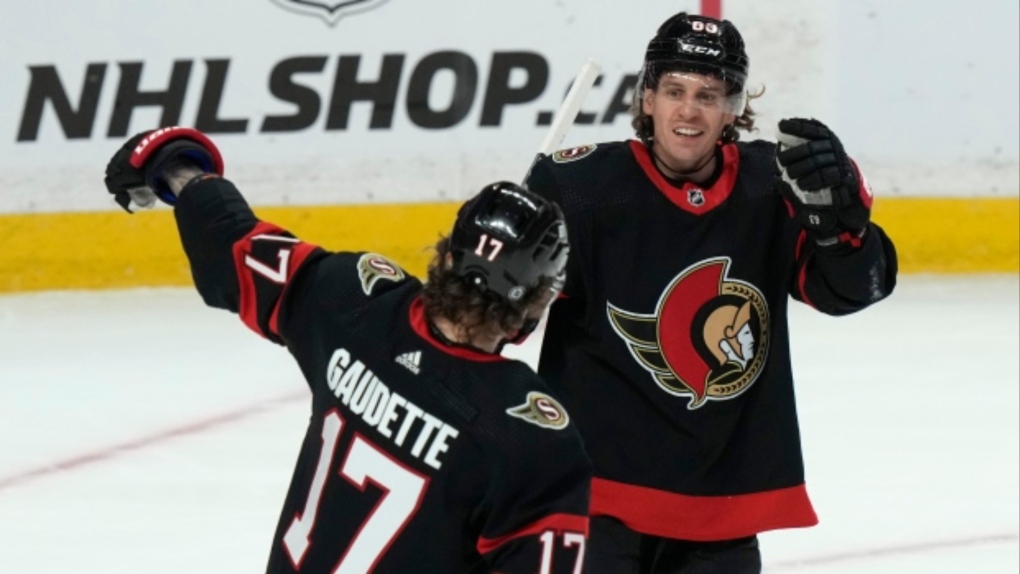 Senators centre Tyler Ennis, right, celebrates one of his three goals with teammate Adam Gaudette, left, during the first period of a 5-0 win over the Sabres on Tuesday in Ottawa. (Adrian Wyld/The Canadian Press)

The Ottawa Senators 5-0 win over the Buffalo Sabres on Tuesday night was overshadowed by the loss of Drake Batherson.

Batherson is Ottawa's leading scorer (12 goals, 21 assists) and was selected for the all-star game. But he's likely to miss out now as he recovers from a knee injury, one the Senators (12-20-3) argue should never have happened.

Late in the first period, Batherson went to chase a puck behind the net and Sabres goaltender Aaron Dell gave him  a shove, which sent the Senators player crashing into the boards feet-first. Batherson struggled to put weight on his left leg and needed assistance down the tunnel.

"It's a bad play by the goalie," said Senators coach D.J. Smith. "He's done it before, we've seen all the replays you know.

"Any other player in the game that does that you know, you'd have to go out there and face the music I guess. Certainly, the league will look at whatever, but it's a bad play . . . and it's an unfortunate thing that a young kid's not going to be able to go to an all-star game. It's dangerous."

Dell, who faced 47 shots, had a different version of the events.

"I was just trying to buy some time for my defenceman and step into (Batherson's) lane," said Dell. "I hope he's all right.

"I wasn't trying to hurt anybody."

Dell's words will likely ring hollow to the Senators as they felt the goaltender was in the wrong.

"I don't like calling out other goalies, but for me as a goalie, you know, they're not expecting to get hit by a goalie, just as when the goalie comes out to play the puck you can't hit him," said Ottawa goaltender Matt Murray, who made 32 saves for his 14th career shutout. "I just thought that's a dangerous play that turns out just to be a really unfortunate result.

"One of our best players goes down.  Just really unfortunate, that's all I've got to say about that."

"It was unnecessary and dirty," said Tkachuk. "I just feel for (Batherson).

"He's had a tremendous year. He's put so much work to kind of get to where he's at. It sucks and it sucks for our group too."

Batherson's injury overshadowed a solid outing by veteran Tyler Ennis, who recorded a hat-trick. Ennis, who didn't dress for two games last week on the road, took advantage of his opportunity.

"Sometimes you just need to refresh mentally, a reset," said Smith. "It's like you're starting the year over.

"You score in the first game of the year and then it starts weighing on you. He sits a couple out, gets away from it a little bit and comes back and here he is and now all of a sudden he looks like, you know, he's 20 years old again and he's making all these plays. So that's how finicky the mind is and how confidence comes and goes."

Three first-period goals was all Ottawa needed to cement this one.

Sabres head coach Don Granato thought his team had a solid start to the first, but very little after that.

"You sit here after the fact and you say, `Yeah, it could've been the other way after the first 10 minutes," said Granato. "But the way we did not respond after that is an indicator, to me, that we didn't have a strong enough foundation going into the game.

“So, there is no feeling good about anything. We had very little response, the way we wanted, after we fell behind."

Formenton made it 4-0 midway through the second. Tim Stutzle drew Dell out of his net and made a toe-drag pass to Formenton, who had a wide-open net for his eighth of the season.

Ennis scored his third with just under a minute remaining in regulation.

Ennis opened the scoring at the 15-minute mark of the first on a beautiful give-and-go sequence with Adam Gaudette.

Batherson then picked up his 13th of the season on the power play as Stutzle's shot hit him before hitting the post. However, in an effort to clear the puck, Mattias Samuelsson ended up putting it in his own net.

Ennis rounded out the scoring with his second of the night as he one-timed a shot past Dell.

Dylan Gambrel also suffered an upper body injury in the first period and is expected to miss close to a week.

This report by The Canadian Press was first published Jan. 25, 2022.

Trudeau says government will do 'everything we can' to avoid U.S.-style formula shortage

Former U.S. President Donald Trump has paid the US$110,000 in fines he racked up after being held in contempt of court for being slow to respond to a civil subpoena issued by New York's attorney general.