A retirement celebration was held this week south of Ottawa, for a dedicated fire chief who served his community for more than four decades.

On the inside of Fire Station #1 in Lyn, Ont., homemade cards line the garage doors, made by school children across the Township of Elizabethtown-Kitley, thanking Fire Chief Jim Donovan for his 43 years of service.

"With lots of years of fire prevention and school visits, we wanted to give the schools an opportunity to make cards, pictures, basically to send their congratulations over to our fire chief," said Alison Merkley, Deputy Clerk with the Township.

"Because of our restrictions, we wanted to limit the number of people who were coming here, but also give an opportunity for the community to be involved," she noted.

"A lot of different classes participated, so a number did some colouring, wrote letters, and looks like they had a lot of fun preparing cards for him," Merkley said. 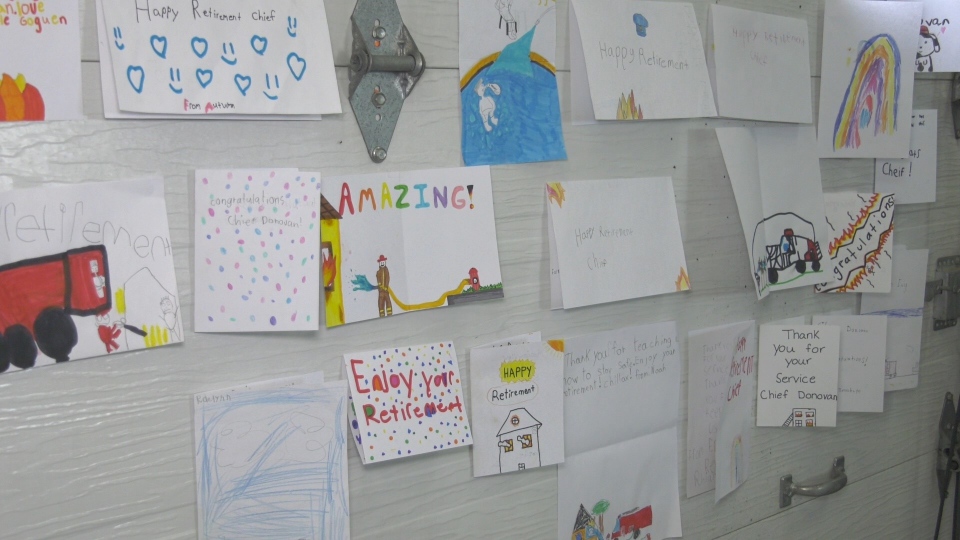 The special ceremony held on May 18 at the fire hall celebrated the years Donovan served his community, as he is set to retire at the end of the month.

Past firefighters, friends and family gathered from around eastern Ontario.

"We all know, and it has been said over and over again, families of firefighters give up a lot of personal time for their firefighter. In a sense, this is not only Jim's retirement, but it is also his family's retirement from the fire emergency services for the Township of Elizabethtown-Kitley," said Township Administrative Clerk Yvonne Robert from the podium.

"You were the perfect choice for fire chief in the 1990s and your years of service have shown how valuable you have been since your appointment," Robert said. "During your career, you have been called upon by other fire departments for assistance, advice and guidance, which acknowledges your expertise and dedication to the fire and emergency services.

"On behalf of the firefighters past and present, congratulations on an amazing career and best wishes for a wonderful retirement and hopefully he learns how to hunt while he's off."

Donovan was then awarded with a special fire helmet from the Township, honouring his years of dedication.

Mayor Brant Burrow also said a few words, describing Donovan's role as leaving "an indelible mark on the community and this department."

"The phrase that comes to mind is that people come in your life for a reason, a season or a lifetime," Burrow said. "I think that all three apply here because you were definitely recruited for a reason, you stuck with us for an extended season, and I guarantee you are going to be remembered for a lifetime and beyond."

Burrow then honoured Donovan with a stone plaque that read 'Donovan Hall.' 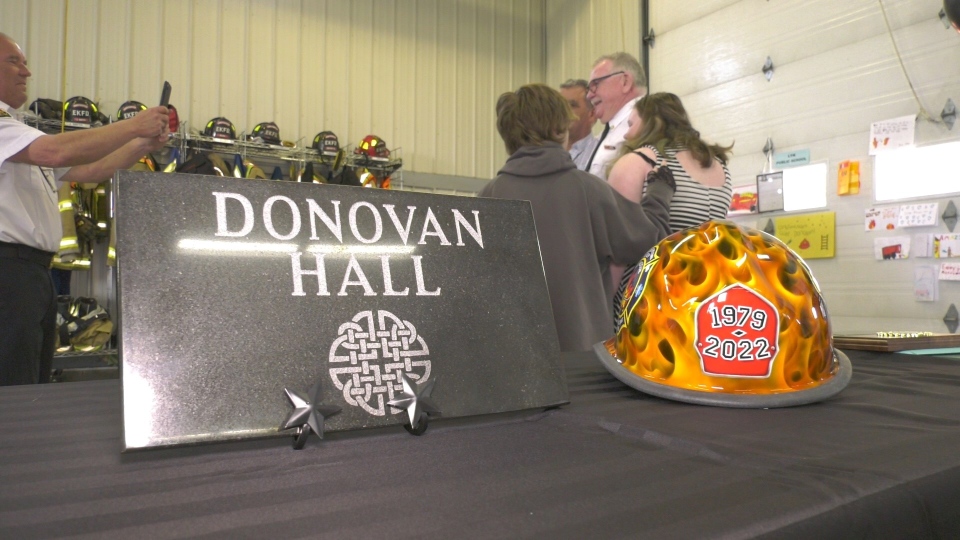 "If you're familiar with this process, we did it in Station #3, but how fitting to do it here in Station #1 where you've spent all these years being chief," Burrow said.

"The training room is now going to be known as Donovan Hall," Burrow said, smiling, as applause rose from the hall.

Donovan, taking the podium, said he was both overwhelmed and humbled.

"To be able to be on this fire department, and during a transition of amalgamation, it's never been a job, it's been a passion and a love," Donovan said.

"(Sitting) in the second row is the loves of my life, and I had their support all the way through and it's humbling today, absolutely." he added. "I thank everybody for coming and everybody who prepared the station today." 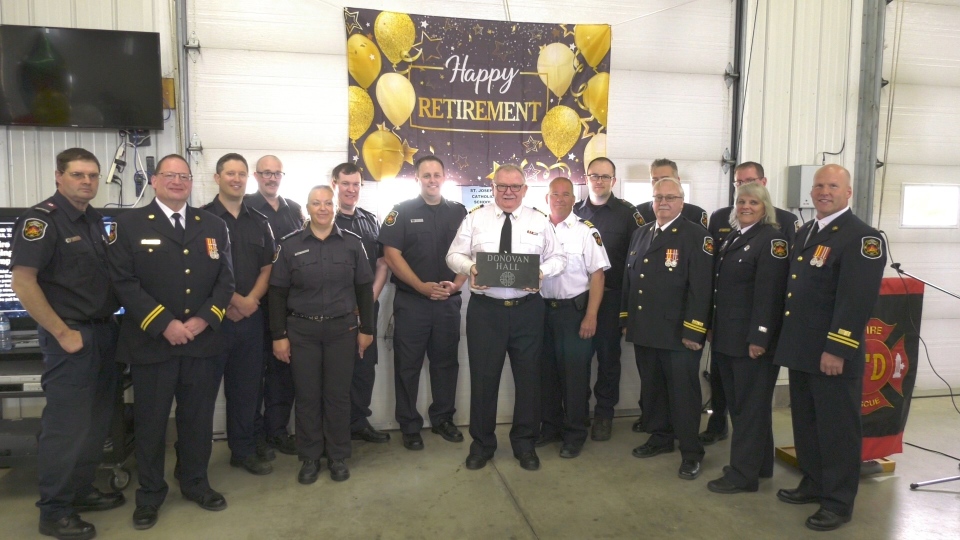 It is estimated that Donovan surpassed 15,000 hours at calls since his involvement in fire services in 1979.

He was awarded Citizen of the Year in 2009, and has been recognized with federal and provincial medals and service bars. He was also the recipient of a Canada 150 medal.

"(I'm) just overwhelmed by the crowd that was here and the gifts that I received," said Donovan after the ceremony. "To me it's never been a job; it's always been a passion which makes it easy to go to work each and every day.

"You do it for the community, you do it from your heart and again I can't say enough about my family support all through the years," he added.

When asked about the profession and the stress that can comes from calls over the past 43 years, he noted some were not easy.

"Usually the good outweighs the bad and that's what you have to look at," he said.

The new plaque that will be on display over the training room is an honour to receive, he added.

"I was just overwhelmed by that. We dedicated the training room at our new station a month or so ago, but again to have that honour and to have your name on the wall that's pretty special," he said. 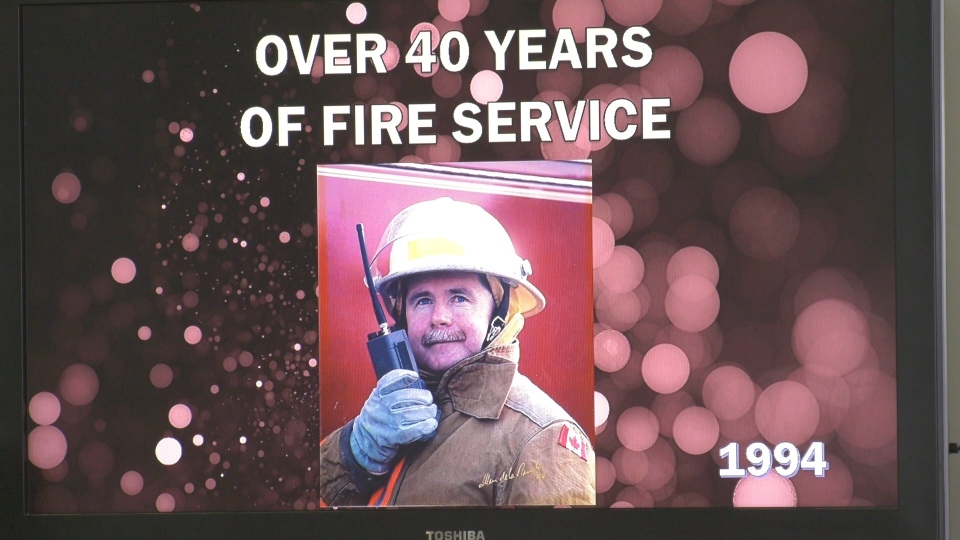 Burrow praised his years of service, noting his retirement is finally starting to sink in.

"Instead of looking forward, today he was forced to start to take a look back at the things that he's achieved and the legacy that he is leaving behind and I think that stone for Donovan Hall really brought it into focus for him," he said.

The torch will now be passed on to Andy Guilboard, who will take Donovan's place as Chief.

"Andy has been the deputy for six years. I groomed him the best I can, and again, the same thing, he's doing it from the heart as well and that's what it's all about," Donovan said.

"Andy will carry on the tradition for sure," said Burrow. "He's got the respect of the leadership team in the department, we've already had people thank us for having the confidence in him to carry that on, so, yeah, he's got some big boots to fill, but I think he's the man to do it."

Now with more time on his hands, Donovan says he has a few plans on what will keep him busy after May 31.