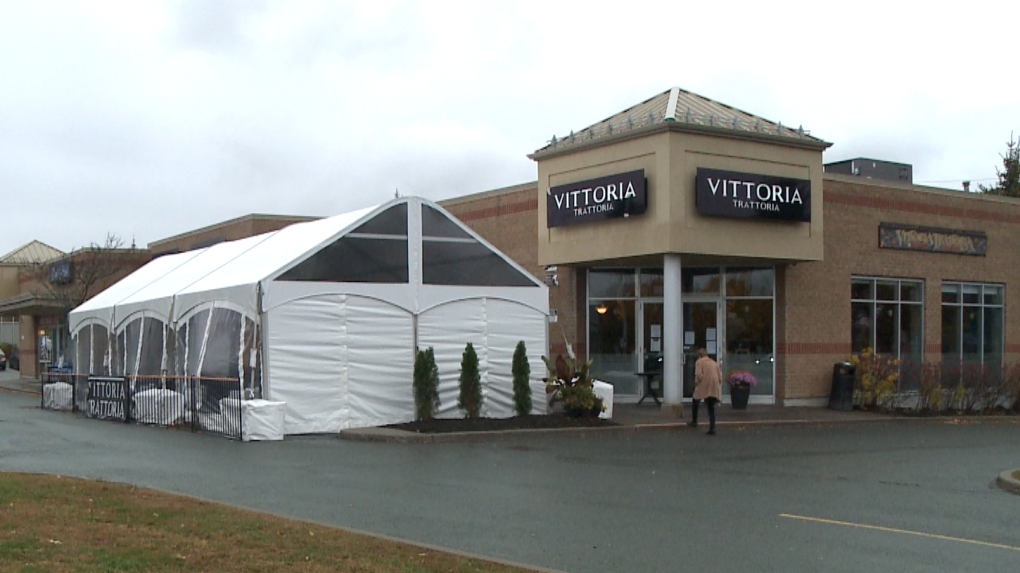 The patio and tent at Vittoria Trattoria restaurant on Rivergate Way.

Statistics provided to CTV News Ottawa shows that eight of the nine restaurants charged for breaking the Reopening Ontario Act received fines for failing to comply with the rules for patio tents.

On Oct. 10, the Ontario Government moved Ottawa, Toronto and Peel Region back to a modified Stage 2 due to the rising number of COVID-19 cases, with new restrictions imposed on food and drink establishments, gyms and fitness centres, cinemas and other venues for at least 28 days.

Indoor dining is prohibited at bars and restaurants, and gyms and fitness centres must close.

The two fitness centres received tickets for opening as a non-essential business.

Vittoria Trattoria was one of the eight food establishments charged for failing to comply with the rules for patio tents.

On Monday, the co-owner of Vittoria Trattoria on Rivergate Way told CTV News Ottawa the restaurant was given an $880 ticket by Ottawa Bylaw for violating the Provincial Order.

Dom Santaguida said his patio tent had one side open, offering what he felt was adequate airflow. He said opening both sides of the tent on a cool evening, even with heaters, defeats its purpose.

"I understand the rules and regulations: I guess I didn't understand what the extent of being open was," Santaguida said.

"Or what we thought was adequate airflow. According to Bylaw, it needs to be 50 per cent open."

The Provincial Order states that at least two sides of a tent or canopy must be open for proper airflow.

One Ottawa restaurant was charged on Oct. 10 for allowing indoor dining during the modified Stage 2.

The fine for violating the Reopening Ontario Act is $880.