OTTAWA -- Students from Carleton University, uOttawa and a local tech entrepreneur are among the eight Ottawa residents who were killed in the Ukrainian plane crash in Iran Wednesday morning.

A vigil will be held Thursday to remember the victims of the crash. It will happen on Parliament Hill, starting at 6:00 p.m.

Friends and family confirmed to CTV News that Ali Pey. 48, was killed in the Boeing 737 crash in Tehran early Wednesday that killed all 176 passengers and crew on board, including 63 Canadians.

Friends say Pey was a generous person and doting father who adored his children. He was also the founder and CEO of Message Hopper, a Kanata-based tech company.

Three University of Ottawa students were also among the victims of the crash, the university confirmed Wednesday.

Family and friends identified them as Mehraban Badiei, Alma Oladi and Saeed Kashan.

Oladi was a PhD student in the university's department of mathematics and statistics. An impromptu memorial was erected at her desk on Wednesday, featuring flowers and photos. Friends described her as "kind-hearted" and "full of life."

Badiei was originally from Tehran and had gone to school in Toronto before moving to become a student at uOttawa.

"I am terribly saddened to tell you that, at this time, we are aware of three uOttawa students amongst the victims of flight PS752," a university spokeswoman said in a statement. "We are still trying to assess if any other students, faculty or staff members were also on the plane."

A statement from Carleton University Wednesday afternoon said two members of its community were killed in the crash.

Biology PhD student Fareed Arasteh and biology alumnus Mansour Pourjam were among the passengers on the plane.

"Our thoughts are with Fareed’s and Mansour’s families, friends and colleagues at this difficult time, and with everyone who has suffered loss in this terrible tragedy”, university president Benoit-Antoine Bacon said in the statement.

Flags on Carleton's campus have been lowered to half-mast.

Roja Azadian, who had travelled to Iran with her husband, was also killed in the crash, friends said. Her husband couldn't board the return flight due to a ticket mix-up, so she went ahead alone, friends said. He remains in Tehran.

Another Ottawa resident, Fereshteh Maleki, was also killed in the crash. She's described as an independent, strong woman who was visiting Tehran for her daughter’s wedding.

Sixty-three Canadians were among the 176 people killed when the Boeing 737 passenger plane crashed minutes after taking off from Tehran's international airport.

Prime Minister Justin Trudeau said Wednesday afternoon that 138 passengers on the plane were connecting to Canada.

The cause of the crash remains unknown. 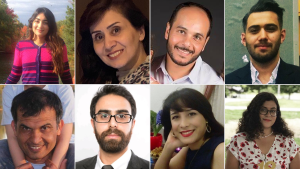