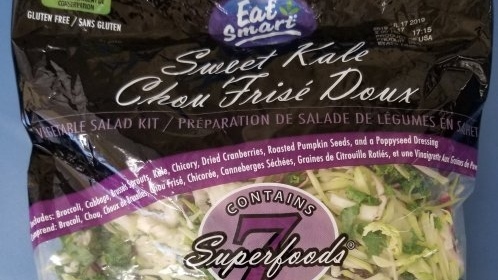 Eat Smart brand kale salad bags are being recalled due to possible listeria contamination. The Canadian Food Inspection Agency says the 794-gram salad bags with best before dates of July 17 are being recalled in six provinces including Ontario, Quebec, New Brunswick, Newfoundland and Labrador, Nova Scotia, and Prince Edward Island.

The agency says the recall was triggered by test results and it is conducting a food safety investigation, which may lead to the recall of other products.

The CFIA says food contaminated with listeria may not look or smell spoiled but can still make people sick. It says symptoms of illness can include vomiting, nausea, persistent fever, muscle aches, severe headache and neck stiffness, and pregnant women, the elderly and people with weakened immune systems are particularly at risk.

The agency says there have been no reported illnesses associated with the salad.