An eastern Ontario guitar maker is now helping others hone the craft, teaching them how to build the instrument, with students not needing any experience to apply.

"I do a little bit of woodworking on the weekends, but (I've) also been taking guitar as a COVID helper if you will, so I thought it would combine passions of mine," said Micheal McAdoo from Montreal, who had passed by Blackwood Guitar Company north of Mallorytown, Ont. many times before.

This winter he decided to finally take the five-week course.

That help coming from well-known guitar maker Ted Brown, who moved to the area in 2020 and is using his love of guitar making to inspire others.

"You walk in on the first day, people come from all over the country, you have a pile of wood sitting in front of you and you select your own wood, you select sides and back and a top material, and then I start teaching," Brown told CTV News Ottawa.

His classes are small, only accepting up to five students, which makes it easier for them to learn.

"This course we've got four, so that means they get 25 per cent of my time," Brown said. "I had a school before where I had up to 14 students, so it gets pretty thin you know in terms of teacher time."

Brown moved to the area in March 2020, hoping to get started right away, but the pandemic held him back. This is only his second class at the location.

"They're about three-quarters of the way through right now. We are in week four, we're probably going to be working a little bit on the weekend but they will all be done by the end of next week," he said.

The students, all have varying backgrounds, like local resident Fred Nolting, who has 50 years of woodworking experience.

"I drive by here and see Ted's sign and I said to my wife, 'I'd kick myself in the head for the rest of my life if I didn't take this course and build a guitar,'" Nolting said with a laugh. "So this is more or less going to be the pinnacle of my woodworking career." 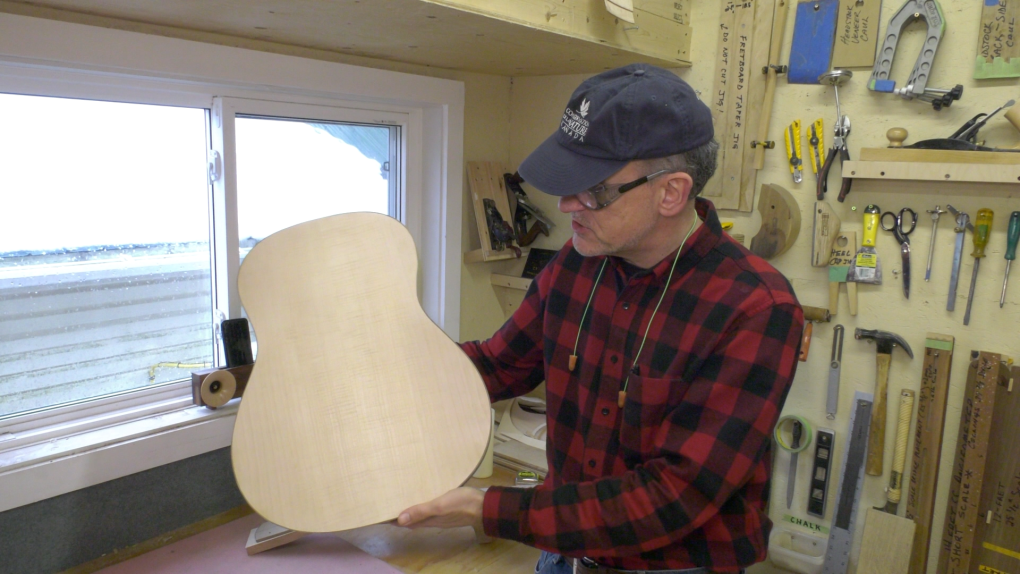 He's so good at the craft, he's making two guitars during the five-week course.

"I feel it's an excellent course, Ted is very patient," Nolting said. "Even the novices, he'll show them exactly what to do, works with them personally and I would definitely recommend this course."

Brown says he lives vicariously through his students, always anxious to see what they will create.

"I love this. I love watching the guys and listening to the chatter amongst them," he said.

"It's pretty hard-core older guys, because they have both the time and the funds to do it," he added, noting the five-week course costs $4,950. It's open to anyone 17 years of age and older.

"For that (money) you get everything included, all the machines, all your instruction, all your materials and it's all premium materials," he said. "You walk away with a guitar that's worth about $3,500 so it's really a good deal if you look at the finances of it."

"It's not a big money maker for me, it's really a passion thing and people walk away with a great guitar," he added.

McAdoo decided to choose only eastern Ontario woods for his instrument, including red spruce, maple and white oak.

"I wanted to do something a little bit different and extremely local," McAdoo said. "I'm big into nature conservation and we are very blessed here in eastern Ontario with all the different species that we have with our natural environment."

"I'll be keeping this guitar, I hope, for the rest of my life and give it on to my kids and grandkids," he said.

Brown asks anyone interested in building a guitar to reach out, and discuss the process with him.

"Come out and see the place, try the guitars and see if you agree that they are in fact, better," he said. "I put my guitars up anytime against the others and I say bring your best guitar, play it against the Blackwood, tell me what you think. And that's putting your money where your mouth is so to speak."

"It's a time commitment but it takes you that long to make a good guitar," he added. "Next Friday, there is going to be mile wide smiles as we get them strung up and we're playing them."

A fourth crew member has been rescued Monday after a storm sunk an engineering vessel two days earlier, according to a Chinese state broadcaster.