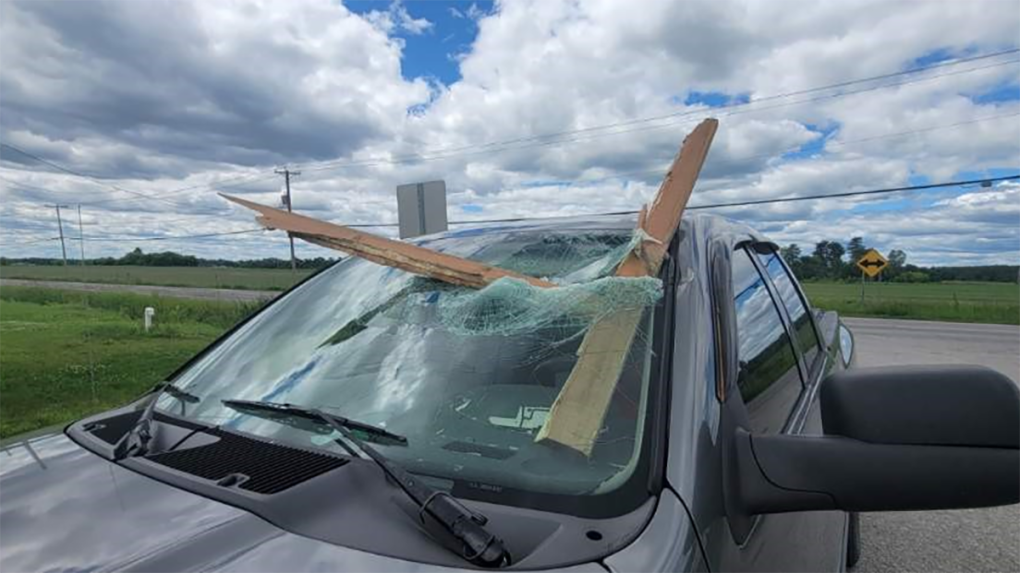 Gatineau police say pieces of wood from another vehicle struck a car on Lorrain Boulevard in Gatineau, Que. earlier this week. (Gatineau Police/Twitter)

A motorist suffered minor injuries after pieces of wood from another vehicle smashed through his windshield in Gatineau, Que.

Pieces of wood from another vehicle struck a vehicle on Lorrain Boulevard earlier this week.

"The victim is doing well, but the situation could have been dramatic," police said on Twitter.

Police say after noticing the loss of the load of wood and recovering part of it, the driver left the scene.

He was stopped on Industrial Boulevard shortly after. Police say the driver will receive a ticket in the mail totalling $1,600 in fines and nine demerit points.

Gatineau police are reminding motorists to secure the load on your vehicle or trailer while driving during the busy period for moving in Quebec.

The fatal film-set shooting of a cinematographer by actor Alec Baldwin last year was an accident, according to a determination made by New Mexico's Office of the Medical Investigator following the completion of an autopsy and a review of law enforcement reports. The medical investigator's report was made public Monday by the Santa Fe County Sheriff's Office along with numerous reports from the FBI on the revolver and ammunition that were collected following the shooting.

While many Canadians don’t support moving away from the metric system of measurement, many continue to use imperial measurements in their daily lives, according to a recent online poll.

Actress Bryce Dallas Howard said she was paid 'so much less' than her co-star Chris Pratt for their work in the 'Jurassic World' films.

'This is our land': Wet'suwet'en hereditary chiefs, pipeline opponents rally in Vancouver

Opponents of the Coastal GasLink pipeline currently under construction in Northern B.C took to the streets of Vancouver Monday, briefly blocking north-bound traffic on the Cambie Street Bridge.

The international community needs to step up to hold the Taliban accountable for human rights abuses in Afghanistan, a year after the militant Islamist group took control of the country and limited the rights of women and girls, according to Heather Barr, associate director of the Women's Rights Division of Human Rights Watch.