Driver's windshield smashed by chunk of snow thrown onto 417 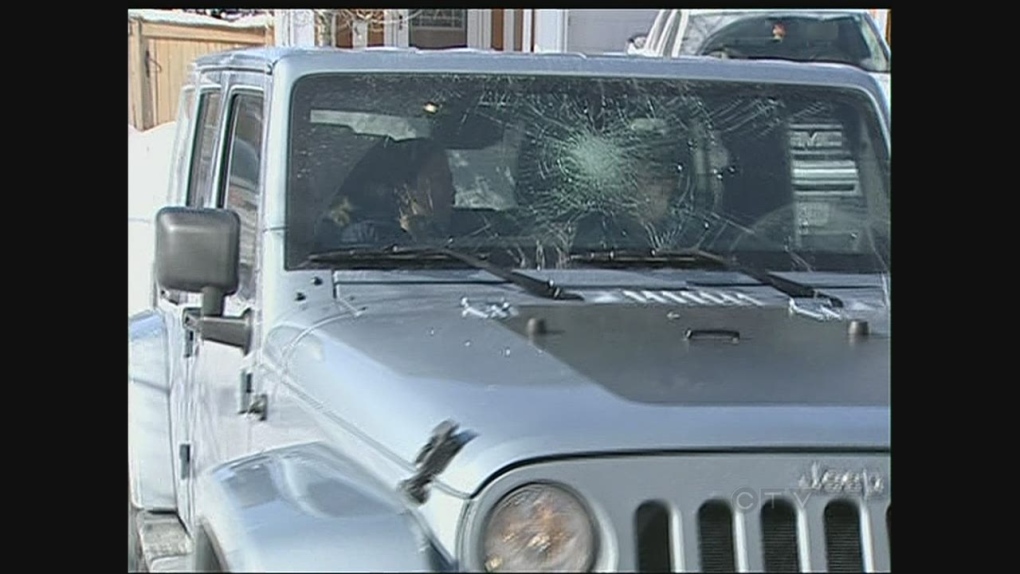 An Ottawa driver’s windshield was shattered Saturday afternoon when a chunk of ice and snow was pelted onto his vehicle from a Queensway overpass.

Jeremy Beaumier and his girlfriend were driving Eastbound on the 417 when they saw who they believed were three teenaged boys perched on the overpass just beyond the exit to Pinecrest and Greenbank roads.

“When we got closer, I honked my horn to kind of scare them off, I guess that painted a target right on the front of my jeep,” Beamier said.

A few seconds later, Beaumier says the boys took aim at his vehicle.

“They just threw a big piece of snow and ice right down on the front and caused a little bit of havoc,” Beaumier explained.  “All the traffic stopped…I slammed on my breaks, but didn’t want to cause an accident either.”

Beaumier pulled off the highway at the next exit and contacted police.

He says police searched the area around the overpass for suspects, but had no luck finding anyone who matched a description.

Sean O’Dacre was in a car behind Beaumier when he saw the Jeep in front of him targeted.

“It was pretty startling,” he said.

“We thought, what’s going to happen, is there going to be a big block of ice, or a brick – you hear about stories where people actually throw things to hurt people intentionally, and obviously we didn’t want anybody to be included in that.”

This is not the first time this has happened in Ottawa.

In 2008, three young children were injured when two teenaged boys launched a rock onto their vehicle from a Queensway overpass.

Beaumier and O’Dacre are both thankful no one was hurt on Saturday.

Beaumier will have to spend $500 to replace his Jeep's windshield.

With files from CTV's Claudia Cautillo