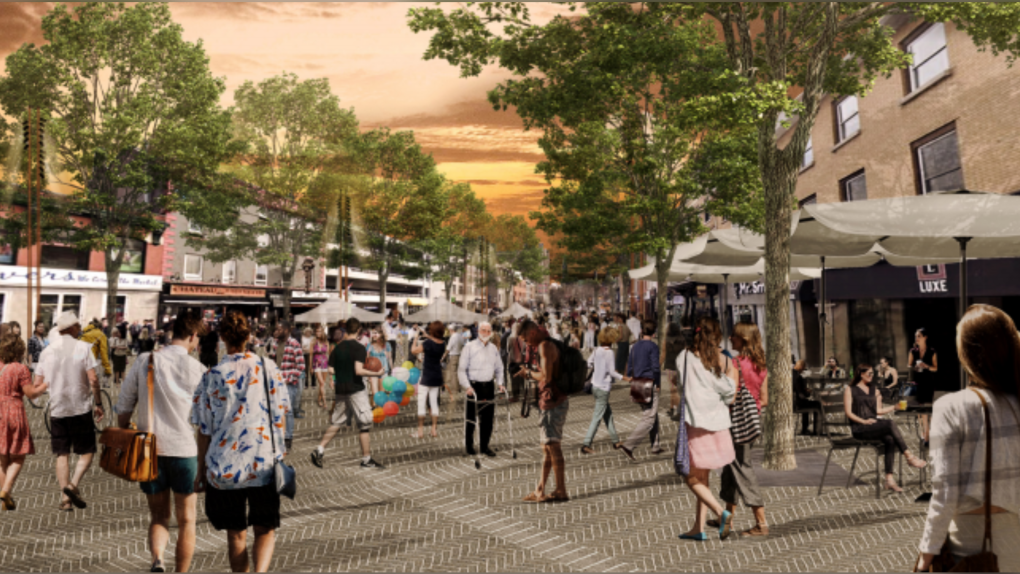 An artist's rendering of the proposed York Street flex plaza between Sussex Dr. and ByWard Market Sq., in which it is closed to vehicles for a special event. (Photo: ByWard Market Public Realm Plan)

OTTAWA -- A draft plan to revitalize the ByWard Market includes plans to increase pedestrian spaces, add more trees, and to replace the parkade on Clarence Street.

The draft plan, which appears on Rideau-Vanier Councillor Mathieu Fleury's website, says its key goal is to "shift the perception of the Market from a vehicular-oriented space to one where pedestrians come first."

That includes creating wider sidewalks on the north sides of George, York, and Clarence streets, closing William Street to vehicles, and turning ByWard Market Square into a pedestrian-only area in the summer, with space to hold outdoor events.

The plan also includes replacing the ByWard Market parkade at 70 Clarence Street with a new "destination building" with a "civic square" on York Street between the new building and the existing ByWard Market Building. The western portion of York Street would be transformed into a "flex plaza" that could be closed to cars during special events.

The new destination building would be two to four storeys in height, with a transparent façade to "showcase the use and activity within." Underground parking at the space would be considered.

Surface-level parking lots would be replaced to create more public spaces. The report says the City would create new parking spaces outside the core of the market to replace the loss of parking.

The plan also includes more lighting and greenery along all streets.

This is a long-term plan, with changes laid out over several years. Some of the high-priority changes include changes to the York Street between Sussex and ByWard Market Square, as well as the creation of the destination building at 70 Clarence and the closure of William Street. Under the plan, high- and medium-priority goals would be completed in three to ten years.

The design is open for comments until June 26. Anyone interested in commenting is asked to email DesignByWard@ottawa.ca. Hard copy or mailed items will not be accepted due to COVID-19 restrictions.

A full report on the plan is expected to be given to City Council by the fall.