OTTAWA -- Parker Wagstaff woke up Saturday morning to noise coming from the apartment above his, so he went upstairs to ask them to keep it down.

What he was not expecting to find was his upstairs neighbour's apartment ablaze.

"When I got there, smoke alarms were on. The guy opened the door and the drapes in the back were on fire and the whole place was up in smoke," Wagstaff told CTV News.

Wagstaff said he knew a family lived in the unit and ran into the apartment to help.

"I went into the room to grab the kids. I knew the layout because it's the same as ours and I went in and grabbed one kid from the hallway and a second from the bedroom," he recalled.

Ottawa Fire Services said in a press release that a fire broke out at a three-storey complex at 3530 Downpatrick Rd. at around 7:30 a.m. Saturday.

"Just after 7:30 a.m., we got a 911 call reporting smoke and flames visible from an apartment," Ottawa Fire Services Public Information Officer Carson Tharris told CTV News. "When (firefighters) made their way inside, they did find one of the female occupants in the bedroom, so they rescued that person and brought her outside to receive treatment from paramedics."

Firefighters used a ladder to get to the second-floor bedroom from outside the building. 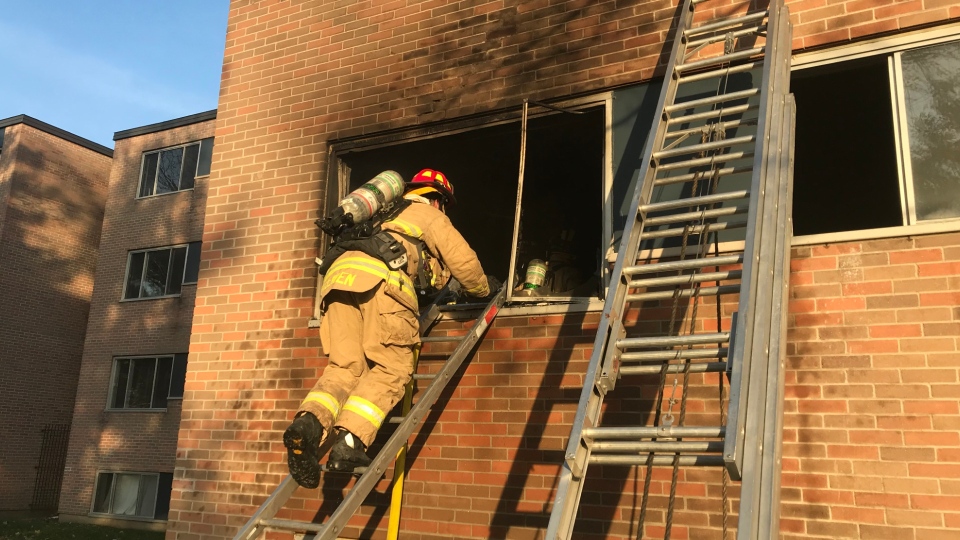 The woman in her 40s was taken to hospital in serious condition, the Ottawa Paramedic Service said in a press release.

Two other adults in their 30s were also transported to hospital in stable condition with possible smoke inhalation, paramedics said.

The fire was stopped by 8:42 a.m., according to Ottawa fire officials.

It caused extensive damage to the unit where it started and fighting it caused water damage to Wagstaff's unit below. Both apartments are presently uninhabitable. The fire did an estimated $200,000 in damage.

What caused the blaze is under investigation.

"At this point, our investigator is on scene," Tharris said. "Based on the injuries, we notified the Office of the Fire Marshal, who has jurisdiction when there are injuries or heavy damage, so the OFM has an investigator en route."

Wagstaff, his wife and their dogs escaped with no injuries. They had only moved in recently, so few items were lost.

"Honestly, it was just me going upstairs to ask them to be quiet, which is kind of funny, and I just saw the dad panic and, you know, did what I know most people would have done," Wagstaff said.