Did you receive a letter with a city of Ottawa logo for sewer and water line warranty? What you need to know

OTTAWA -- A letter arriving in mailboxes with a city of Ottawa logo on it, offering warranty coverage for sewer or water lines is raising questions from some residents.

Who is the letter from and do you need warranty coverage?

One of the letters outline pricing, which caused some concerns.

"At first I wondered if it was a scam," said Spring.

He did his research, and found that it’s a type of insurance.

The letters are actually from Service Line Warranties of Canada, who have partnered with the city.

"To offer affordable and optional service plans, to protect the homeowner for the water and sewer piping that connects their home to the city’s systems," says Myles Meehan - Senior VP of HomeServe, the parent company.

Through the arrangement with the city, the company is allowed to use the city’s logo on the mailings.

"What the program does for Ottawa residents is it provides them an education to help them understand that they have a responsibility to maintain and repair these pipes," says Meehan.

Water, Sewer, and Storm Water pipes on your property are the homeowner's responsibility.

She says this new partnership is "just one option" for homeowners. 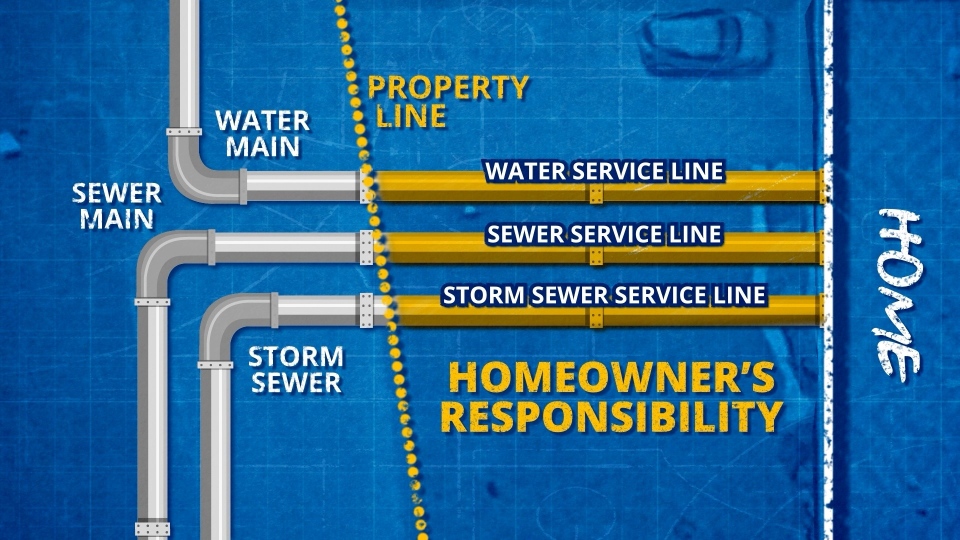 Does this cost the city anything, or do they make money?

"The city is not making money from this program; it’s a revenue neutral program. The city receives a small amount of money through it, to cover the administrative costs of the program," according to Wheel Cuddihy.

Meehan says the partnership exists with many other Ontario municipalities and cities, and is approved by the Association of Municipalities Ontario.

He says the program has been in place for several years in areas like Peel Region in the Greater Toronto Area and in the City of Hamilton.

"We’ve done about $3 million dollars of repair there in about two and a half years."

Meehan says that as of Tuesday afternoon, they’ve had 400 residents signed up in Ottawa.

If a pipe breaks or is clogged, it could be pricey

Kelly MacLaren lives in a hundred year old home in the Glebe, and had to have her lawn dug up to replace the water line this past December.

"If you can’t have water coming into the house, that’s a huge deal," MacLaren says.

She paid $12-thousand to repair what she says was a hundred year old lead pipe that had burst.

"All I have to show for it is a messy front yard. It’s not like I bought a new car, or something fancy renovated in the house - it’s not a very fun thing to go through."

"It’s not usually not the first thing I jump at to say, 'oh, let’s dig up your front lawn,'" says Dave Smythe of Out of This World Plumbing. He did the work on MacLaren’s water line and says it’s an expensive, but last resort.

"In the scheme of the overall city and volume of people that are here, it’s probably not that common; but certainly, as the city has grown, and as it has an older infrastructure, there are more and more breakages happening."

He says a pipe could become clogged or break because of tree roots, aging pipes, landscaping work; or, in the case of a sewer line — what you flush down the drain.

"If it’s the owner has put down, it’s usually a question of us sticking drain equipment in, and either hooking it back out - or pushing it into a bigger pipe."

Should I buy a warranty program or insurance for my pipes?

"If you’re living in an older, more susceptible neighbourhood, it might not be a bad thing," says Smythe. He says older homes have older infrastructure and it might be worth it for some.

"The majority of insurance companies will provide coverage for it already."

You may already be covered, and if you’re not.