Wine Writer, Natalie MacLean has other sweet tastes to share.

She suggests raising a glass to “dessert in a glass”.

“One of the great things about cold January days and nights is icewine, a particular specialty that we produce here in Canada.”

Icewines have more sweetness in flavour but they contain lower alcohol content.

“It's surprisingly low at about 10%, unlike fortified dessert wines like port and sherry which clock in at about 20%,” says MacLean.

How is icewine different from other dessert wines?

“It’s a matter of cold versus rot. With icewine, the water in the grapes freezes more quickly than the sugar and separates out, concentrating the sweetness and fresh fruit flavours of the dehydrated grapes.”

“The grapes for icewine are picked and pressed at -8oC or colder. That’s why grapes are typically picked at night so that the concentrated winter nectar isn’t diluted by melting. If that does happen, the wine must be labeled as “late harvest” rather than icewine,” explains MacLean.

“Sweet wines, such as French Sauternes and Barsac, Hungarian tokay and some late harvest wines, depend on botrytis cinerea, or “noble rot.” This good fungus penetrates the grape skins and allows the water to evaporate, concentrating the juice.”

Natalie MacLean with the cool facts on ice wine

Let’s start with what is icewine?

“Although Icewine was first made in Germany in 1794 when farmers tried to save their grape harvest after a sudden frost, Canada is now the world leader in its production because we’re consistently colder every year than Germany.”

(MacLean suggests two great examples one from Pillitteri and one from Wayne Gretzky, a natural fir with ice anything, both made from the Vidal grape.)

So how cold does it have to be?

“When I say cold, I mean cold. The temperatures have to drop below –8 Celsius to harvest icewine grapes. That’s why they’re often harvested at night in December of January and these frozen marbles have been known to break the wine presses.”

The freezing concentrates the flavour in the wine into luscious flavours of apricot and peach preserves like these icewines from Tawse, Henry of Pelham, Peller Estates all from Niagara as well as Quails’ Gate from British Columbia. They’re all made from the Riesling grape. 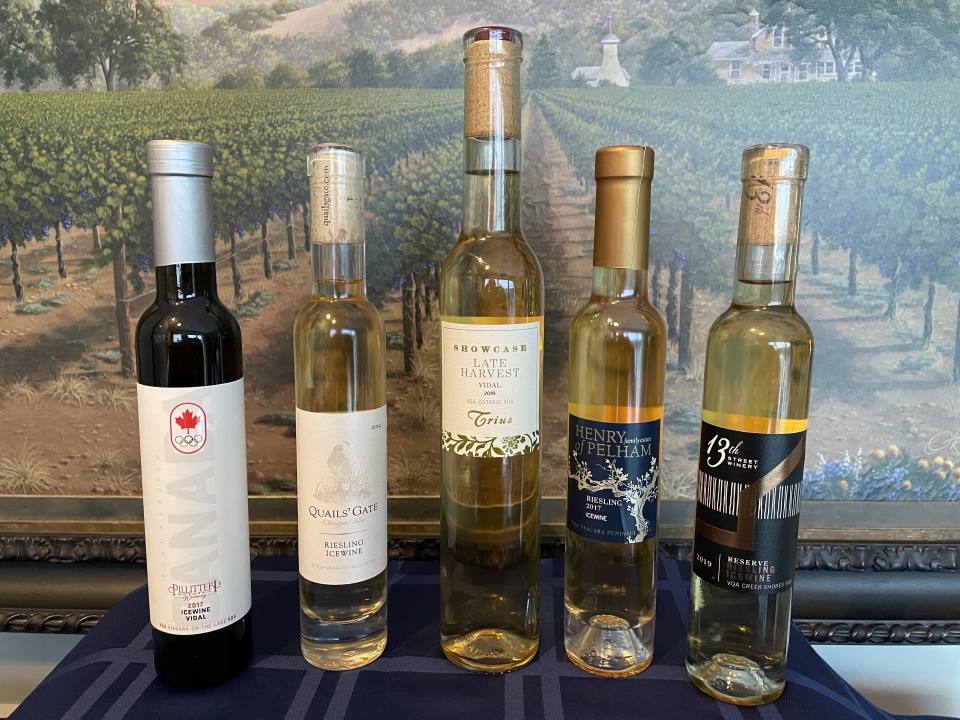 Why is icewine so expensive?

“Icewine harvests usually occur three to four months after the regular fall harvest which can mean a crop loss of as much as 60 percent due to predators such as starlings, deer, insects, as well as weather: rain and hailstorms.

It takes about 3-4 kilograms (8 pounds) of grapes to produce one half bottle of icewine, whereas that same amount of grapes would make six to seven times as much dry wine.

But the result is liquid gold like these icewines from Tawse made from Chardonnay and Lakeview Cellars made from Gewurztraminer.”

Are there any icewines made from red grapes?

How did this year’s icewine harvest go?

“This year’s harvest is down about 30% over previous harvests for several reasons: first, 2020 was dry and hot which is ideal for dry table wine, especially robust reds, so many vintners chose to make more of that rather than icewine. Second, with Covid, icewine sales are down significantly since much of it depends on duty-free shops in airports. Third, many winemakers felt they had enough stockpiled inventory of icewine from previous vintages to satisfy this year’s demand.”

How is icewine different from late harvest wines?

“The grapes for other sweet wines such as these late harvest wines from Thirty Bench and Trius are picked after the fall harvest usually in late October or early November, well before the icewine harvest. So they’re sweeter than dry table wines but not as sweet as icewines.” 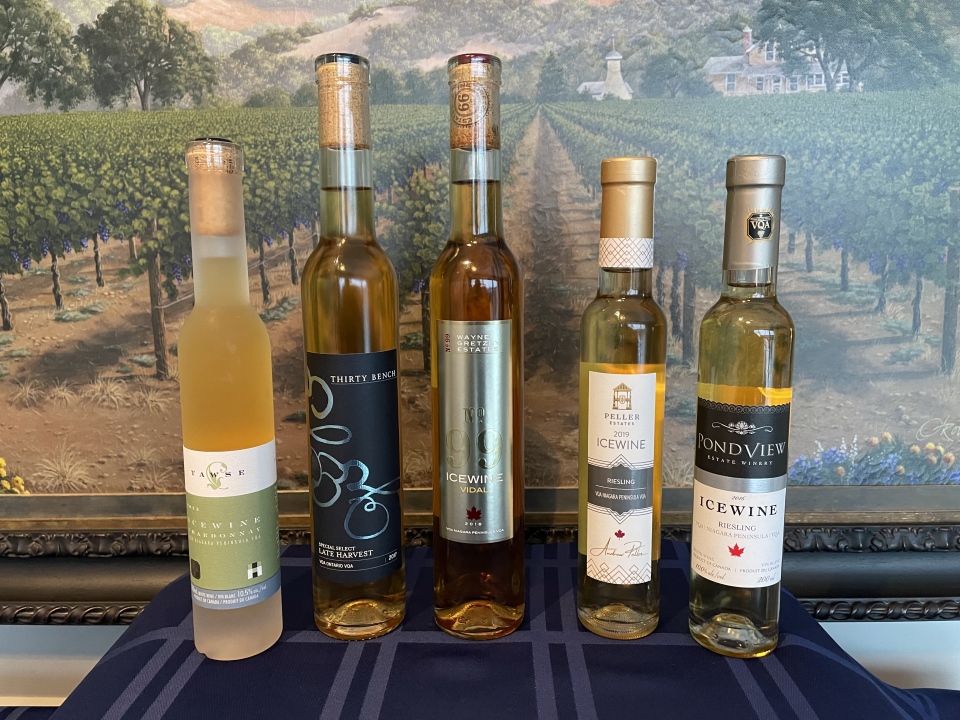 What about other sweet wines?

“Here’s another late harvest wine called Optima from Quails Gate in BC for which the grapes are affected by botrytis or noble rot. This is the good kind of rot that concentrated the grapes and flavours even more. It’s the same thing that happens to Bordeaux famous dessert wines called Sauternes, like this one from Chateau Doisy Daene. The most famous one of course is Chateau d’Yquem, which sells for thousands of dollars per half bottle.” 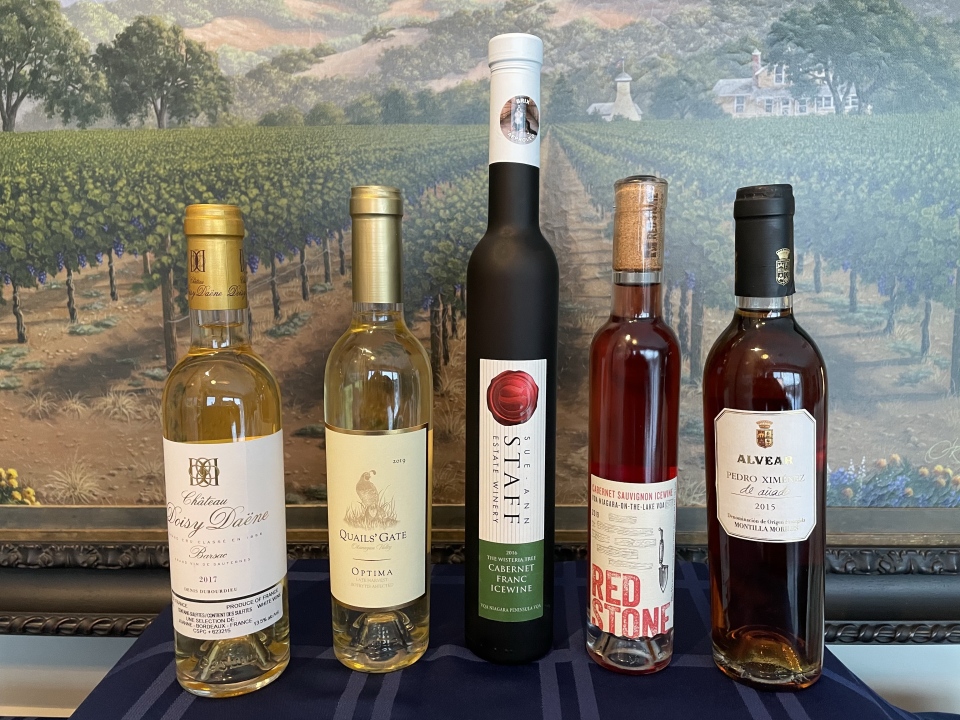 What about German and Austrian dessert wines?

“In addition to icewine, they also produce gorgeous dessert wines that allow the grapes to hang longer an are categorized according to sweetness like this Auslese from Wegeler in Germany and even sweeter this Beerenauslese from Lens Moser in Austria.”

I also have a wonderful Spanish sweet wine from Alvear which has a nutty character and to finish off we return to Ontario with this Southbrook framboise made from raspberries. It’s dessert in a glass.” 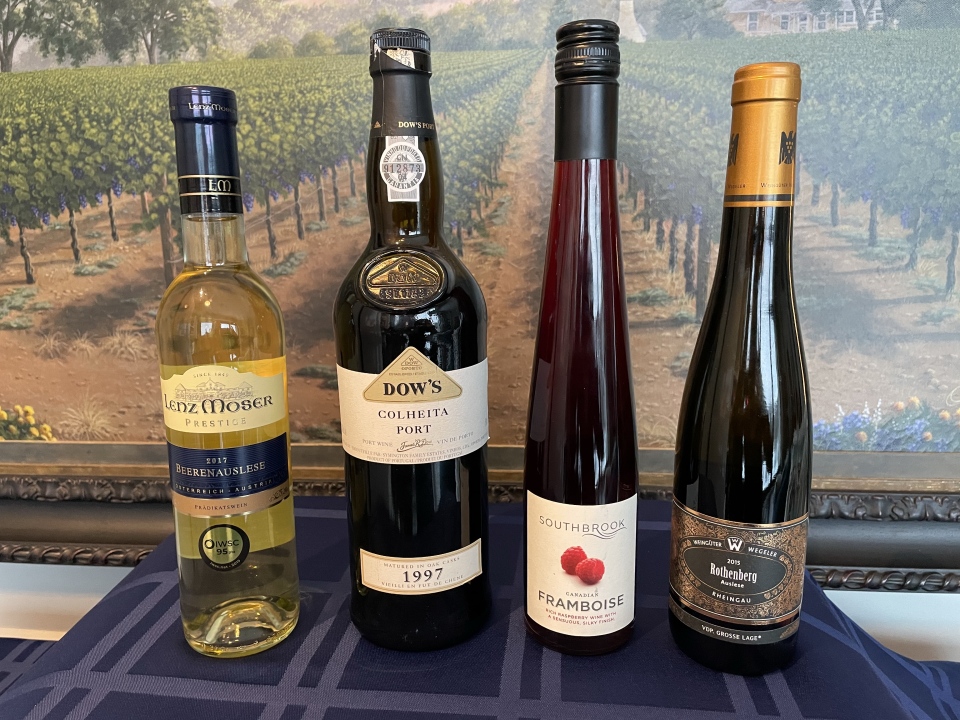 You can learn more at www.nataliemaclean.com.