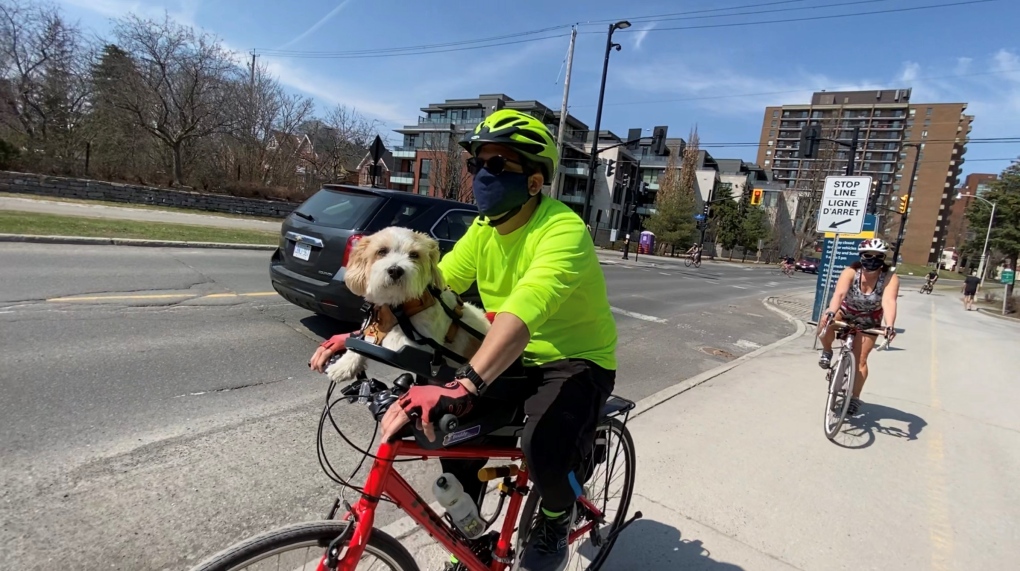 OTTAWA -- If the warm weather is making you want to head outside for a bike ride, you’re not alone.

Across the capital region, many cyclists are out on streets and paths, and this weekend, there will be a little more room on the streets to enjoy the outdoors safely.

Cycling on the path along the Rideau Canal is Kirk Parsons with his dog, Max.  Parsons loves to go for bike rides but wanted to bring his friend along as well. He found a solution, a dog carrier that is installed between the handlebars and seat and is equipped with a harness for extra protection.

"I found this online and I decided to buy it and he loves it he loves going cycling," says Parsons. "It’s a great activity it’s really good to get out now and this is great for dogs any dog under thirty pounds."

While it’s not quite yet the dog days of summer, many are taking advantage of the above-seasonal temperatures this week and getting outside.

Pathways are busy all across the city.

Friends, Barbara Mingie, Merilee Lackey and Dorothy are cycling along the shores of the Ottawa River.

"There are so many fantastic trails all around we’ve been skiing on the trails and now we’re biking on all the trails," says Mingie.  "But I try to avoid the paths on weekends because it gets a little too crowded but we’re wearing masks now."

The National Capital Commission says in light of the Ontario government's stay-at-home order and the unseasonably high temperatures in the forecast, it will close both the Sir John A. Macdonald Parkway and Sir George Etienne Cartier Parkway to motor vehicles this weekend.

The NCC says roads will be open for active transportation options this weekend.

Here is a look at the road closures:

Both lanes of the Queen Elizabeth Driveway, located on the west side of the Rideau Canal, from Fifth Avenue to Somerset Street.

Both westbound lanes of the Sir John A. Macdonald Parkway, located on the south side of the Ottawa River just west of the downtown core, from Booth Street to Carling Avenue.

Both lanes of the Sir George-Étienne Cartier Parkway, running along the south side of the Ottawa River, just east of the downtown core, between the Aviation Parkway and St. Joseph Boulevard in Orléans.

The NCC says it will provide more information later this month on possible options for active transportation for the rest of the spring and summer for parkways in Ottawa and in Gatineau Park.

Bikes have become a hot commodity throughout the summer months of the pandemic, and this year will be no different. At Cycle Power on Carling Avenue in Ottawa, owner Ken Power says people have looked ahead and he has been selling bicycles since October.

"Bikes are already in shortage," says Power. "There is one company we have been dealing with that has been taking care of us and we’re getting a steady supply of bikes from them."

But there will be a wait, likely about three weeks.

Power’s most popular seller is a hybrid, a cross between a mountain bike and a road bike. He says they are the perfect blend of durability and speed for this city and are priced between $600 and $900.

The city also wants to remind cyclists that whether it's a path, trail or street, be road-wise, wear a helmet, have a bell, light and know your hand signals. For those in a motorized vehicle, it’s important to keep an eye-out for cyclists and rememberto share the road.