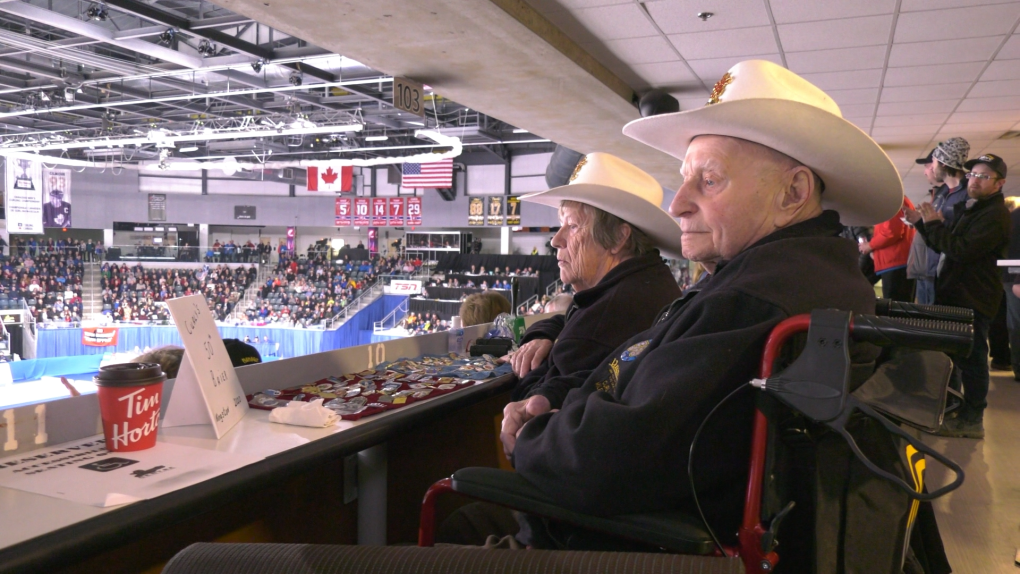 KINGSTON, ONT. -- If there's one guy everyone's talking about at the 2020 Tim Hortons Brier in Kingston, it's "Curly".

He's hitting a major milestone after all; the curling fan from Calgary is attending his 50th Brier.

"My first was in 1961, it was in Calgary, went to it, and got the bug I guess," he laughs from his seat in the Leon's Centre in Kingston, where the games are being held this week. "Haven't missed one since ‘79."

If the fact that he's crisscrossed the country to take in the Briers doesn't give his love of curling away, his nickname sure will. He wouldn't even give his actual name when asked, wanting to simply go by "Curly".

He's amassed more than 50,000 curling pins from not just Briers, but curling competitions that have taken him around the world. He says he likes to frame them himself.

"All different provinces and countries," he says pointing to Brier pins he's brought with him. They are from places like Hamilton in 1991, and Calgary in the ‘80s.

It was only recently that Curly said he decided to make 50.

It almost didn't happen; just two weeks before the competition started last Saturday, Curly had some health issues in his legs.

He remembers when the Brier was a competition for local, smaller curling clubs. He says he probably enjoyed the games more back then.

So after that many Briers, how does Kingston stack up? He says the hospitality has been great.

"It's just been wonderful, the way I've been treated," he says from his reserved spot.

It's not surprising he feels that way; he's basically a celebrity around the area. All through the halls, you can hear people talking about the guy who's been to fifty Briers. People stop to shake his hand and say hello.

His wife Marj Schill, 80, who's attending her 37th Brier, agrees.

"The people have been phenomenal," she says. "They really are friendly and make you feel welcome. We're thankful for that."