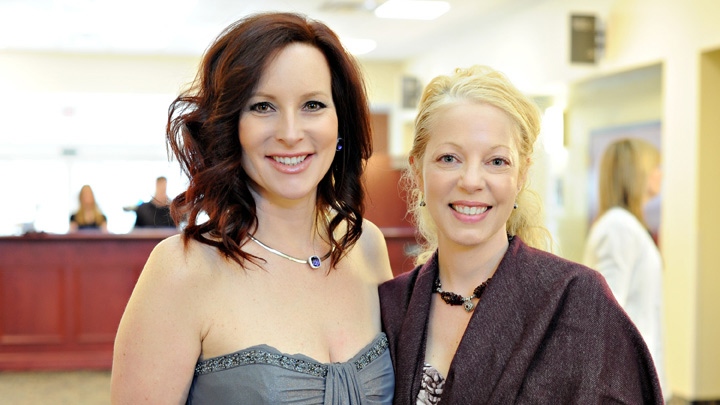 CTV’s Kimothy Walker has been named the Ottawa Professional of the Year by the Women’s Business Network.

The Producer and Anchor of CTV Weekend News was honoured at a gala celebration at the Hampton Conference Centre Wednesday Night.

Kimothy has spent 24 years working at CTV, and has been at the helm of the CTV Weekend News for more than 13 years.

In her acceptance speech she said, “I’d like to thank CTV. I have had a simply glorious career, from the Upper Ottawa Valley to the jungles of the Philippines and the summit of Mt. Kilimanjaro alongside injured soldiers, because they believed in me, and gave me the power to use the CTV brand to make our community a better place.”

Kimothy dedicates more than 200 hours a year to countless charities, and organizes the annual CTV Amazing People gala to, not only honour Ottawa’s incredible achievers, but to also raise money to build schools in Nicaragua with SchoolBox. The first school funded by her gala, organized in partnership with Chair Eric Collard, is being built in July by Ottawa young people selected by the SchoolBox team.

Over more than 20 years, about 50 journalists have passed through CTV’s apprenticeship program, with Kimothy as one  the teachers. They are now all working around the world, moving journalism forward into the next generation. Kimothy started as a student at CTV in that same program.

“I’ve made it my business to participate in building a caring community. Anyone can do that. And it’s good for business. If I didn’t care about the people I serve, they would not be loyal to the product I produce…their local news. Without viewers our advertisers wouldn’t buy, and business would suffer.  Respecting people earns that loyalty,” she said just before thanking her family.

CTV Weekend News has been number 1 in its timeslot every year since she took over as Producer/Anchor.

The other two winners at last night’s event were Shannon Lambert, in the Corporate Category. Shannon is Vice-President of Veritaaq.   Rebecca Page of  Concierge Home Services won in the Entrepeneur Category.