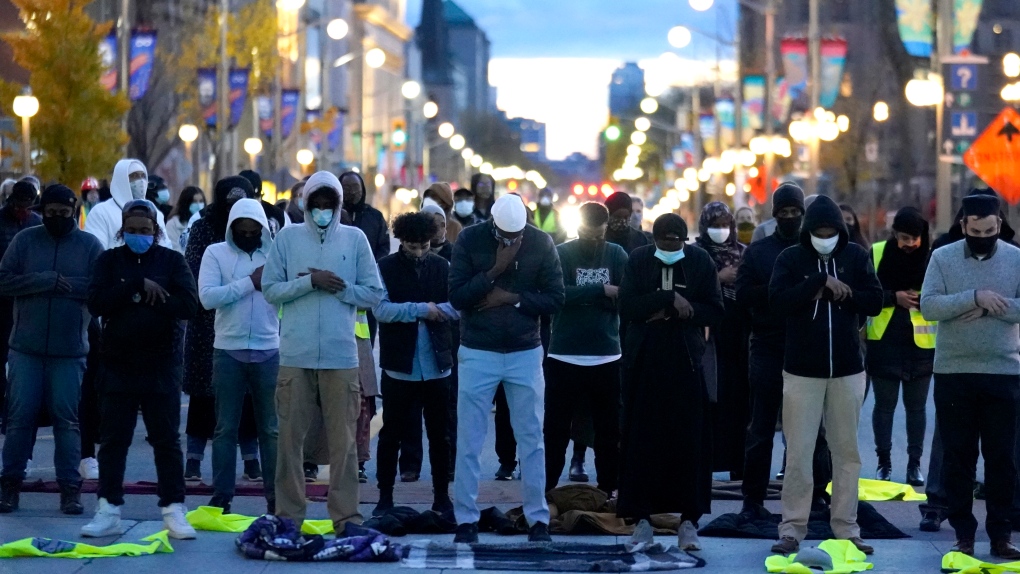 Community members pray in memory of Abdirahman Abdi as the rally blocks the intersection in front of Parliament Hill, after an Ottawa Police constable was found not guilty of manslaughter, aggravated assault and assault with a weapon in connection with the 2016 death of Abdi, a 37-year old Black man, in Ottawa, on Tuesday, Oct. 20, 2020. (Justin Tang/THE CANADIAN PRESS)

OTTAWA -- One month after an Ottawa police officer was found not guilty in the death of Abdirahamn Abdi, the Crown has announced it will not appeal the verdict.

On Oct. 20, Justice Robert Kelly found Const. Daniel Montsion not guilty on charges of manslaughter, aggravated assault and assault with a weapon.  In his verdict, Justice Kelly said the Crown had failed to prove beyond a reasonable doubt that the force Montsion used during the arrest of Abdi was unjustified.

"The Crown has not discharged its onus of proving beyond a reasonable doubt an unlawful act or unreasonable conduct for manslaughter or an unjustified assault to ground liability on the other two charges," Justice Kelly said. "In the end, I am left with a reasonable doubt on each of the three main issues."

In a statement to CTV News Ottawa Thursday afternoon, the Ministry of the Attorney General confirmed the Crown will not appeal the verdict.

"The Crown’s right of appeal from an acquittal is limited to errors of law, and does not include errors relating to factual matters," said the statement.

"After a thorough review of the judge’s decision and the legal aspects of this case, the Crown has concluded that there is no legal basis upon which to appeal the acquittal."

In a statement on Twitter, the Justice for Abdirahman Coalition said it was "outraged but not surprised" the Crown would not appeal the verdict.

This is because law is not a science. They are subjective rules created by people with unconscious biases & enforced against Black & Indigenous communities. The state protects its own. The sad truth is that if Abdirahman was white, he wouldn't have died at the hands of police. 2/

"Our criminal justice system is made up of laws created by people who do not value Black life. This is because law is not science," said the coalition.

Montsion was charged in 2017 following an investigation by Ontario's Special Investigations Unit into the arrest of Abdi on Hilda Street in July 2016.

Shame on the Crown appeal office. Feel free to email Randy Schwartz : randy.schwartz@ontario.ca who made this decision and tell him how you feel. We will never stop fighting for Abdirahman Abdi & against state sanctioned anti-Black racism #BlackLivesMatter #JusticeforAbdirahman