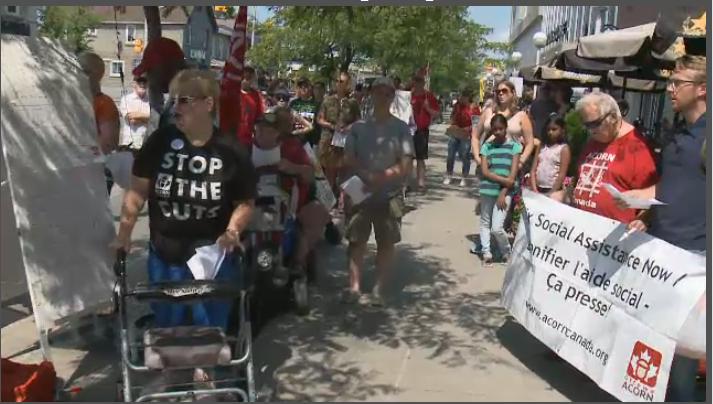 More than one hundred people gather for a noon hour rally against the Ford government's changes to welfare payments.

A rally against the Ford government's changes to social assistance payments brought more than one hundred people to Preston Street Thursday.

The protest, organized by the advocacy group Ottawa ACORN, aimed to raise awareness about recent changes to welfare payments. Last week the provincial government announced it was reducing a planned increase in payments from 3 per cent to 1.5 per cent.

"It gets depressing," said Andrea Terry. "You want to have a good life but you can't when you have politicians that take money from us."

"It's impossible to live off that and with him doing those cuts it is going to be even harder," she said.

But the Ford government sees it differently. They say the province cannot afford to continue paying for the current welfare system. That is why his government has announced it will revamp the system within one hundred days.

Those at the protest said they are not optimistic the changes will improve their situation.

"I've been working the whole five years my partner has been on disability," said Lauren Seward-Munday. "I'm doing my best trying to save and trying to pay for everything to make sure my son has all he needs. It’s been a real struggle."

Seward-Munday said she is often going contract-to-contract working two jobs, without benefits, to support her family. But the more money she makes the less social assistance her family receives. Now, the increase she has been budgeting for is being reduced.

"I'm doing everything right and I'm being punished for it," she said. "I'm not getting ahead."

As part of its protest, ACORN members dropped a letter off at local MPP Lisa MacLeod's office with a list of changes they want to see implemented in the new social assistance program.